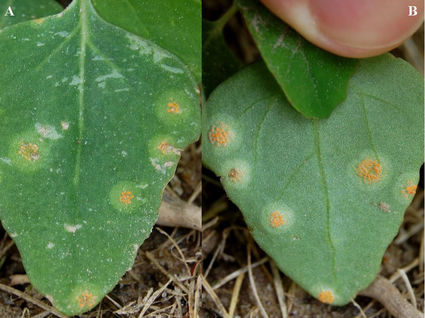 Only two early stages occur on the hosts of economic importance (primarily sugarbeets and spinach), while the other stages infect several species of saltgrass (Distichlis spp.), a warm-season grass native to arid areas of the western United States, and also commonly found in brackish, marshy areas or highly saline soils.

In early spring, overwintering spores (teliospores) of the fungus germinate on saltgrass to produce a distinct type of spore (basidiospores), which are blown by wind where they infect sugar beets or a number of other alternate hosts, including common lambsquarters. Infections on the alternate hosts by the basidiospores give rise sequentially to the pycnial and aecial spore stages. The newly formed aeciaspores are released and re-infect the saltgrass, resulting in new overwintering spores, completing the life cycle.

In the late 1890s, the fungus (P. subnitens) was well-known and commonly recognized as a pathogen on various saltgrass species throughout North America, particularly in the western United States. An intimate association between P. subnitens infections on saltgrass and adjacent aecial rust infections on the sugarbeet cousin, common lambsquarters (Chenopodium album) was also noted from numerous locations across the West.  However, did you know it was a virtually unknown amateur botanist in Nebraska who contributed greatly to the expansion of known alternate hosts?

Prior to 1904, C. album was the only known aecial host for P. subnitens, but in the summer of 1904, the Rev. John Mallory Bates suggested that rust infections he observed in Nebraska on species of Cleome (Beeweed), Sophia (tansymustard), Lepidium (pepperweed), Erysimum (wallflower), and Salsola (Russian thistle) were related to P. subnitens because they closely resembled infections on lambsquarters.

Bates communicated his observations to the noted rust pathologist J.C. Arthur and sent him samples from Distichlis, and infected seedlings of Cleome serrulate, C. album, and numerous other plant species covered profusely with yellowish-orange aecia and spores, all of which he thought belonged to the same rust species. Arthur pronounced the disease to be identical to P. subnitens and confirmed Bates’ deductions by inoculating these same host plants with spores and reproducing disease.

J. M. Bates (1846-1930) was an Episcopal clergyman, widely respected as an as an amateur naturalist and botanist. He was particularly interested in and knowledgeable of the birds, plants and rust fungi of Nebraska. Bates was born in Connecticut and educated at Trinity College and Berkeley Divinity School before moving west. In 1886, he moved to North Platte, Neb., where he served two years as rector before relocating to Valentine, Neb., a town in the heart of the Sandhills, where he stayed until 1902.

It was in this post at the age of 43 that he took up the study of systematic botany as a hobby. At that time, Bates was solely in charge of at least 20 far-flung Episcopal mission stations scattered throughout north central Nebraska, which he periodically visited with the mail team traveling by horseback and wagon. He became an eager collector, observing and documenting the natural flora and fauna of Nebraska.

His private herbarium of sedges and grasses eventually numbered more than 12,000 specimens and was purchased by the University of Nebraska for $1,000 following his death. Although the scientific work for which he likely is best known today is his publication on the sedges of Nebraska, he was also internationally recognized as an authority on plant rust diseases and ornithology. In fact, in 1899, he was licensed by the federal government to report the activity of migratory birds in the region.

As the senior Episcopal priest in Nebraska, Bates finally settled in Red Cloud in 1903, where he spent the remaining 27 years of his life as the rector in Grace Church. He died suddenly in Hastings in 1930 at the age of 84, only days after attending the joint meeting of the Nebraska and Iowa Ornithologist’s Unions at Omaha, where he was on the scientific program, giving a presentation entitled “Instinct and Reason in Birds.” 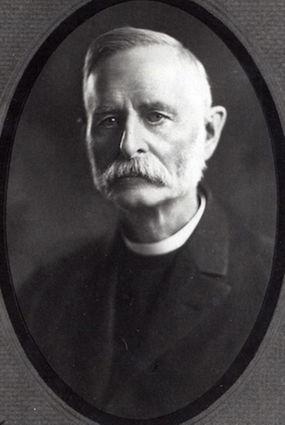 Bates was truly a remarkably versatile man, spending more than 40 years in service on the isolated plains of Nebraska in the late 19th and early 20th centuries. In a memorial sermon after his death, one admirer stated, “No temples have been erected to honor him, but his memory is enshrined in the hearts of many people.”

By 1934, through the combined work of Bates, J.C. Arthur, and Ellsworth Bethel, another highly respected amateur botanist with the Colorado State Museum in Denver, the known aecial host for P. subnitens was further enlarged to include more than 100 plant species in 50-plus genera, representing an amazing 24 families.