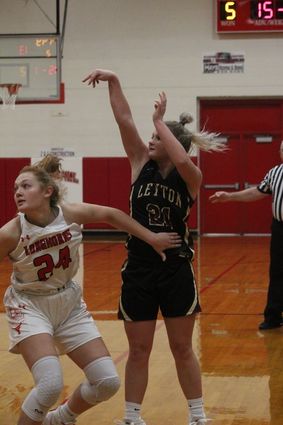 The girls’ teams started, and with just five players dressed, the Lady Warriors had a tall task ahead, and fell behind early as Kimball passed and pressed inside for points. Led by senior Ella Draper, the Lady Warriors battled back to narrow the Kimball lead to 12-to-10 at the end of the first quarter.

Kimball continued to score while Leyton struggled for scoring opportunities, and only a scoring burst by Draper kept Leyton within reach at halftime down 29-to-20.

The third quarter continued the battle between the teams, as Kimball extended their lead but the Lady Warriors found ways to keep in the game. But by the fourth quarter, the Leyton squad couldn’t keep up with the pace and the Lady Longhorns pulled away for a comfortable 59-to-34 home win to start their season.

Senior standout Megan Spicer led the Kimball scoring with 23 points and had five steals on defense and senior Sydney Biesecker had 12 points and two blocked shots in the win.

The boys teams matched up next, and the Warriors started hot and continued to score while shutting down the Longhorn offense, pulling away to a big 33-to-3 lead after the first period. Junior Kole Bush knocked down 16 points and grabbed seven steals on defense while Leyton had four players score in double digits as the Warriors breezed to a 73-to-19 victory to open their season. The Longhorns had a short run of offense in the second quarter, but were shut down by the aggressive Leyton defense for the entire game.The Warriors scored inside and also from the outside, sinking seven three pointers in the victory.

Leyton hosted the Morrill Lions Saturday, and again the Lady Warriors faced off with just five players against a very deep and experienced Morrill squad. Immediately it was clear the Lady Warriors could not handle the full court press and fast break offense of the Lady Lions, and ran off 11 points before Leyton scored, and tallied a 28-to-5 lead at the end of the first quarter. The swarming defense forced turnovers and bad shots, as Morrill used their speed and passing to pull away to a 44-to-14 halftime lead.

Leyton fell by a final score of 65-to-28 to start their season with an 0-and-2 mark. Morrill senior Ilycia Guerue led all scorers with 25 points.

The Warriors then took the hardwood against the Lions, and both teams struggled with turnovers while the defenses dominated the first quarter. Morrill was able to pull away in the second half, and the Warriors trailed at the end of a low-scoring first half, 22-to-12. Leyton couldn’t keep pace with the Lions’ scoring in the third quarter, falling further behind and preventing a strong fourth quarter from closing the gap, and Warriors fell by a 50-to-36 final score. The strong defensive effort was wasted by the cold shooting of the Warriors starters. Senior Caden Lewis led the Morrill scoring  with 18 points in the win.

Leyton next hosts South Platte on Friday in Dalton.