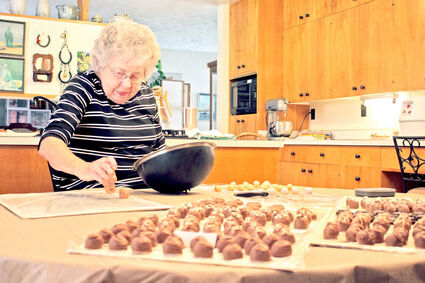 There are people who just stand out in the world. They don't lead armies or research medicines. They take the harsh or bitter ingredients of life and make something sweet.

Bertha Mueller, known locally for her chocolates, has a story of adapting to what life gave her family.

She was born in 1930 in Byron, Wyo., moving to Topeka, Kan., when she was a child and moving back to Wyoming a year later. Her mother died when Mueller was 14 years old. Then she lost her dad when she was 16. She and her two younger siblings moved in with their oldest sister and her husband. She graduated high school in 1948 and attended business school in Denver. She moved to Sidney after graduating business school and went to work at the USDA Agriculture Office. She married Wesley Mueller in 1951 and they farmed northeast of Potter.

Her family was always a priority, which lead to her unexpected business venture in her later years. One of her talents was making gourmet, hand-dipped, chocolates. There is a cliché about food tasting good because of the love put into it. That couldn't be more true with Mueller's chocolates. The process is a physical task because each step of making the chocolates is made by hand; blending the ingredients, folding the fondant until it is just the right consistency, flavoring it as needed then coating it with the freshly-made chocolate. It is often a mother-daughter bonding experience.

At one time, the home business was producing about 300 pounds of chocolate each year, selling the chocolates by the piece, not by the pound.

“When I grew up, my mother always made candy. I continued it with my family,” she said in a 2018 interview.

The effort expanded to making decadent chocolates for family to including friends and then to a seasonal home business that drew the attention of regional media sources. The making of chocolates evolved from just something she did for her family to gifts for friends and neighbors, then to a home craft business about 14 years ago when her husband died. She started making and selling chocolates then. She grew to be known as “The Chocolate Lady.” Her favorites were milk chocolate, white chocolate and dark chocolate.

The process of preparing the chocolates was almost a science with Mueller and her family closely watching every step of mixing flavors, temperatures, specific ingredients. The recipe, which includes specific heating and cooling stages, was given to her by her cousin more than 30 years ago.