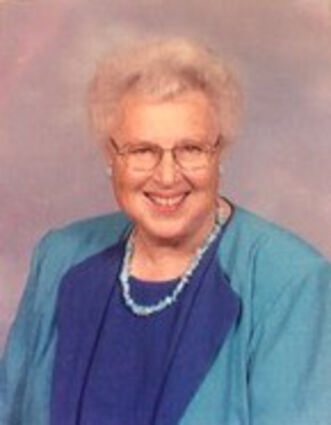 You may view Margaret’s Book of Memories, leave condolences, photos and stories at http://www.gehrigstittchapel.com. Services will be recorded and available on our website for viewing.

Margaret Altha Pyle was born in Pawnee City NE on March 5, 1927 to Dorrance I. Pyle and Altha C. (Hawkins) Pyle. She was the oldest of three children. Following graduation from Pawnee City High School, Margaret attended the University of Nebraska in Lincoln NE, majoring in Home Economics Education. She met Allen Klingman there, and they married on June 30, 1946. They went to Hawaii for his job with Hawaiian Pineapple Company in August of 1946. They lived in the town of Wahiawa on Oahu until April 1951. Their four children were born there. In 1951 the family returned to Chappell NE to manage the Klingman family farm.

Peggy was a reader her whole life and had a tremendous vocabulary. She loved crossword puzzles and often did them in pen to the amazement of her daughters. She was interested in what was going on in the world as well as things nearer to home and enjoyed carrying on a conversation with anyone. She had a great sense of humor and her kids liked to see if they could get her laughing hysterically. She was a gardener; planting and enjoying the flower beds around the farmhouse as well as a large vegetable garden for the family’s use. Peggy also loved music and had a good soprano voice. She would spontaneously burst into song if the spirit moved her.

Peggy worked for the Fashion Plaza in Chappell for over 20 years. She enjoyed visiting with customers and helping them find what they needed. Peggy served her community in several ways. She was a member of the School Board for several terms, she helped with the 4-H clubs her kids were in, and taught the adult Sunday School class at the Methodist church for many years. She was a member of the WSCS (Women’s Society of Christian Service) at the church, and also a member of several social groups in Chappell including her book club and Chapter CI PEO.

Peggy was a talented seamstress and quilter and made quilts for new family babies and other family members. She was one of the group of quilters that hand quilted at the Methodist Church in Chappell for a number of years.

In August of 2009, Peg and Allen moved from the farm to live in assisted living at Chappell MMCC. After its closure, she moved to the nursing home in Oshkosh, NE. She was preceded in death by her beloved husband Allen, her parents, and her brother and sister. She is survived and missed by her four children and their spouses, seven grandchildren and 19 great-grandchildren.

Memorial donations may be given to the Chappell United Methodist Church.