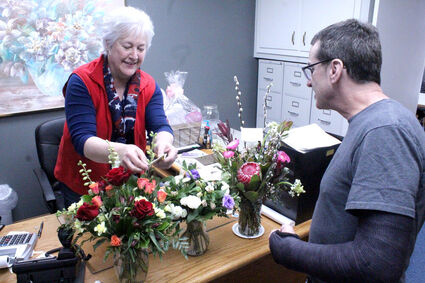 After five city managers and 30 years, JoDene Houser decided to disconnect the time clock and face life at a different pace.

Friday morning was spent with a surprise reception with friends, family and co-workers past and present taking a moment to wish her a happy retirement.

She came to the City after working at Social Services for six years.

“When I first applied, my mom and dad didn't want me to go,” she said Friday.

She said they were concerned about high turnover, and the job wouldn't last long.

“I started as administrative secretary,” she said.

She then moved to Administrative Assistant. Working under City Manager Gary Person, she was offered the opportunity to take on some of the human resources duties.

“He asked me if I would be interested,” she said.

She started as a human resources representative. As her education and experience advanced, she became the HR manager, while retaining the title and duties as Administrative Assistant to the City Manager.

Looking back over the 30 years in the City offices, Houser sees many fond memories; most of them are from her relationships with people she has met.

“The relationships you develop with people. To me, that's the most rewarding,” she said.

She recalls the advancement of technology, from new desktop computers to laptops with more processing ability than the previous generation servers.

“I had the first personal computer in the City,” she said.

She also recalls working with the Ladies Chamber in the 1990s, and reading a letter about “Dress Down Days” from Goodland, Kan. From 1997, when the program was initiated in Sidney, to 2006, about $100,000 was generated for local programs.

“It was an awesome time to be involved,” she said.

Her future is deliberately relaxed, but with goals and excitement of getting involved in activities she has had to let lapse.

“I'm really looking forward to spending time with my grandkids,” she said.

They will be her priority. After that, expect to see her with friends at coffee shops and at bible studies.