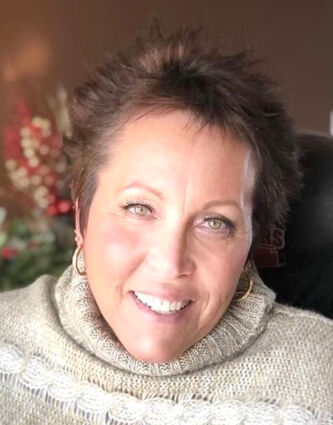 Funeral Services will be held at 11 am Saturday January 16, 2021 at the United Methodist Church in Sidney with Pastor Corey Jenkins officiating. Services will conclude at the church.

Visitation will be held one hour prior to services at the church.

Holechek-Bondegard Funeral Home and Cremations in Oshkosh is serving the Jenkins family.

In lieu of flowers the family is asking to donate to the Multiple Sclerosis foundation.

Marcy grew up in North Platte, Nebraska where she attended K-12 then onto Midland Community College to play Volleyball. After her successful volleyball career, the small-town girl moved to Lexington Nebraska where she was the General Manager of a McDonald’s. Soon after this Nebraskan Girl found herself in the middle of New York City, where she stayed for two years as a nanny.

In 1988 she met Greg Jenkins on a blind date they had set up themselves since they talked all the time as she was a dispatcher for a company Greg worked at.

In 1990 she married her husband, and they were blessed with their first child in 1991, a perfect little boy, Tucker. In 1993 they were blessed with another child this time a girl named Kaylee. Greg and Marcy moved to Sidney, NE, where she got a job at Cabela’s’ in 1990. She stayed with the company, climbing her way up the ladder and into new positions, eventually retiring in 2016 after 26 years of service. She received a number of rewards, including “Best Outfitter”

She was an active member of WOW (Way Out West) and Night of TomFoolery, her first show being Noises Off in 2002 where she continued on until 2008, she received the awards “Best Actress” and “Best Supporting Actress” actively through the years of 2002-2008. Marcy was always one to find on the stage, always knew how to bring laughter to everyone around her and always lit up a room.

Marcy was avidly active outdoors, some of her favorite things were fishing, camping and four wheeling with her husband and children. You could always find her sunbathing any chance she got.

Unfortunately, six months after her wedding, Marcy was diagnosed with Multiple Sclerosis, also known as “MS”. But Marcy never let her disease get her down; she continued on living her life as independently and prosperous as possible. Marcy was able to continue to live with her family in Sidney where she was cared for in her home for the past few years.

The family would like to give special thanks to a few certain individuals who were active in Marcy’s care. Daneal Dickinson, Odette Lopez, Katlynne Goscha, Anita Hershberger, and Lori Turner. Without these individuals Marcy would not have been able to thrive for as long as she did. She was grateful for each and every one of them.

Marcy is survived by her mother, Gwen Dickenson of North Platte, husband of 30 years Greg Jenkins and Daughter Kaylee Jenkins of Sidney.

She is preceded in death by her father Wayne Dickenson of North Platte and her son Tucker Jenkins of Sidney.