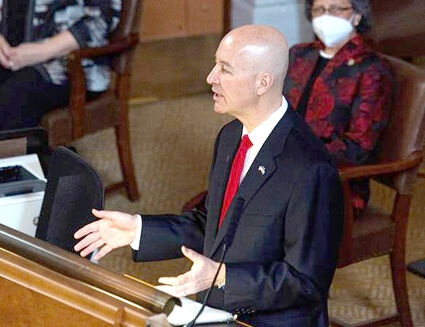 LINCOLN — Gov. Pete Ricketts discussed Nebraska's response to the COVID-19 pandemic in his State of the State Address Jan. 14. He also outlined his proposed budget including a property tax relief initiative.

"Even as we've had to overcome the challenge of the pandemic, the work of Nebraskans everywhere has kept the state of the state strong," Ricketts said after welcoming and congratulating new members of the Nebraska Legislature.

Before discussing the plans for the budget, Ricketts commended Nebraska's response to the pandemic. Over the past 10 months, the state has been working to protect hospital capacity and help Nebraskans recover. Nebraska's unemployment rate for November 2020 is only one-tenth of a percent above where it stood one year ago. The state's unemployment rate is one of the lowest in the country, he said.

"As the pandemic continues, we have an opportunity to keep moving our state forward. This legislative session, we will do this the Nebraska way: by working together for the best interests of the people we serve," Ricketts said.

Ricketts proposed limiting spending to a growth rate of 1.5 percent for the next two-year budget to achieve several vital priorities, the first being property tax relief, he said.

According to Ricketts, the budget includes delivering $1.36 billion in relief over the next two years. He said the initiative is not enough to get Nebraska on the road to property tax relief. He also proposed limiting the growth of local government property taxes to 3 percent. Local spending constraints are critical to ensure relief goes into people's pockets, he said.

"The limits we are proposing here are reasonable and will help ensure that local control of the institutions we cherish endures for years to come," Ricketts said.

Sen. Dave Murman of Glenvil and Ricketts also proposed the continued allowance of out of state healthcare workers to continue working in Nebraska to encourage more skilled healthcare professionals to meet the state's needs.

As part of the governor's initiative to protect public safety, the budget also includes a $115 million initial investment in a new correctional facility to replace the Nebraska State Penitentiary. The proposed facility is scheduled to be completed in 2025 and would cost an estimated $230 million.

"By 2025, Nebraska's corrections system is forecasted to house over 6,400 inmates. Today, we have an operational capacity of over 5,300 inmates, and the Nebraska State Penitentiary is decaying," Ricketts said.

Another effect of the pandemic has been the transition to online communication. Many Nebraskans still do not have broadband access.

Ricketts concluded by reminding the Legislature members of the importance of their work for Nebraskans.

"As the session gets underway, I'm confident that we can achieve each of these in the coming days by working together for the people – the Nebraska Way," he said.