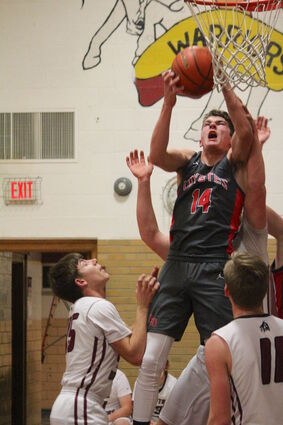 Potter-Dix’s Coyote Basketball team continued its strong play with three big wins over the week and are looking strong going into this weeks’ MAC Tournament.

The Coyote’s started last weeks’ action off traveling to Kimball to match up with the winless Longhorns, and a slow start combined with a strong showing by Kimball kept the game close in the early going. But Potter-Dix broke the game open in the second quarter, outsourcing the Longhorns 29-to-3 to earn a 48-to-14 advantage at the half. The Coyotes cruised for the rest of the game, putting up 34 second-half points on their way to an 82-to-26 victory. The Coyotes had three scorers in double digits, led by sophomore Luke Kasten’s 27 points.

Friday’s match up against Leyton in Dalton would prove to be a much tougher task, as the Warriors are better than their record indicates with solid players and a strong defense. The game opened with both teams firing from long distance, trading three pointers with Potter-Dix leading 17-to-13 at the end of the first quarter. The scoring slowed in the second quarter until the Coyotes had a late surge capped by another Kasten three point hit to go into the half leading 31-to-23. The Coyotes opened the second half with four quick points, but the Warriors finally got their offense untracked and cut the Coyote lead down to five 44-to-39 going into the fourth quarter. But Leyton junior Jonathan Borges fouled out at the end of the third and Potter-Dix was in the bonus throughout the entirety of the fourth quarter.

Leyton scored in the fourth quarter but the solid Potter-Dix foul shooting ket the Warriors from gaining ground. The Coyotes went 6-for-9 at the line in the final period, while the Warriors did not get one opportunity at the line in the fourth quarter. Potter-Dix held on and pulled out the 58-to-53 win. Leyton junior KJ Bush led all scorers with 23 points and Potter-Dix senior Javon Coyle led the Coyotes with 20 points.

On Saturday, the Coyotes ended the week hosting the 5-and-2 Hay Springs Hawks, and the teams played hard in a tight battle that had the Coyotes manage a 24-to-19 lead at the end of the first half. Potter-Dix got their offense in gear in the third quarter, and went on a scoring tear, outpacing the Hawks 23-to-6 in the period to put the game away on their way to a big 54-to-39 win. Kasten had a double-double in the win with 21 points and 15 rebounds in the game. Head Coach Cory Michelman’s team is playing fast with the ability to go on big scoring runs and should be a tough out at this week’s MAC Tournament. Look for the Coyotes to match up against the tough Bridgeport Bulldogs in the finals of the MAC Tournament.