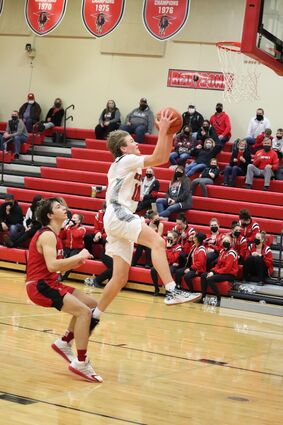 Sidney’s Red Raider Basketball teams traveled to Gothenburg on Friday to face off against the Swedes, and the action started with the girls’ teams matching up late in the afternoon. The Lady Swedes were at 9-and-6 for their season, and Sidney Head Coach Tyler Shaw stated that Gothenburg was a battle-tested team that plays a tough schedule with good defense that he expected to be a challenge for his squad.

The Lady Raiders started slowly, with a turnover on their first possession followed by missed shots and second-chance shots. Both teams defenses disrupted the offenses, causing turnovers and breaks in rhythm and the Lady Raiders trailed 11-to-15 at the end of the first quarter. Gothenburg built a seven point lead on a three point hit by freshman Aubrey O’Hare, but Shaw then substituted his second line, and they were able to cut down the lead to three points at 20-to-17 with strong play by sophomore Gabrielle Fortner. Sidney continued to pressure Gothenburg for the rest of the half, and took a 23-to-20 lead into the intermission as junior Emilee Wieser provided the turning point of the contest by hitting a free-throw then burying a three pointer at the end of the half to give Sidney a lead they would not surrender.

Sidney continued their strong play into the second half, with senior Karly Sylvester playing strong defense and scoring in the paint and junior Alecca Campbell driving the lane and adding points. Sidney extended their lead to seven going into the fourth quarter, and continued to score to build up a twelve point lead halfway through the final period. But turnovers and fouls extended the game for the Lady Swedes. Gothenburg missed too many shots down the stretch to capitalize on Sidney’s generosity, and the Lady Raiders were able to pull away for an eight point victory, 52-to-44. Sylvester led the Lady Raiders offense with nine points in the victory. The Lady Raiders improve to 13-and-4 and will travel to Chadron Friday to face the Lady Cardinals. 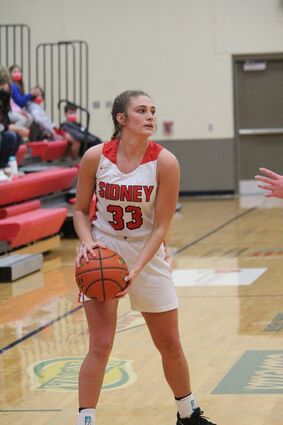 The boys’ teams then took the court, with Sidney Head Coach Austin Lewis saying the Swedes were tough C1 team that didn’t have a great record, but their losses were really close against very good teams. Lewis wanted to see improvement on the Red Raiders pacing, as they’re a running team that should score a lot of points and he also looked for improvement on defense with more physical play. The Raiders also started their game slowly, falling behind early but junior Sawyer Dickman hit a three pointer followed by another two point shot at the end of the first to narrow the Gothenburg lead to 16-to-12. In the second quarter, both teams struggled to score until sophomore Micah Schneider hit a three pointer followed by sophomore Cam Leeling also burying a three to tie the game up at 23-to-23 going into the halftime intermission.

Sidney’s defense did a great job in the third quarter to limit Gothenburg’s scoring opportunities, and opened a 36-to-30 lead at the the end of the period. The Swedes threatened in the fourth quarter, but were never able to narrow the lead to less than four points, and Sidney hung on for a 48-to-41 victory. Dickman led all scorers with 23 points in the victory. The Red Raiders improve their record to 8-and-8 and are next scheduled to travel to Chadron to face the Cardinals on Friday.