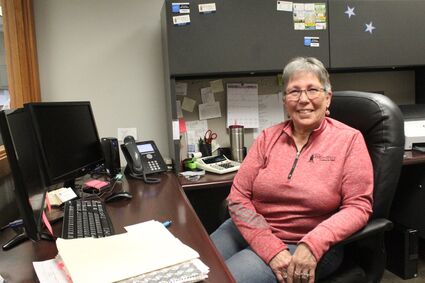 She didn’t expect a career in banking, although she grew up liking math and number challenges.

She had another passion. Cooking.

However, the intrigue of number equations and finding the missing factor never really left Susan Young. She was the name behind the Dalton cafe for several years

“It was a good business,” Young said.

The cafe was owned by a group of community members, and operated by Young. It was good for her, a person who loves spending time with people, and it was a part-time occupation for some of her children. After eight years of managing the cafe in Dalton, the opportunity to be more analytical than creative presented itself, literally walked into her life. A bank employee entered the cafe and asked if she would apply for an open position.

The opportunity became a 21-year career. She started as a teller, and worked her way up.

“Whenever they asked me to learn anything I was wiling,” she said.

Along the way, she had the opportunity to learn everything except loans

She says she really enjoys banking, and praises the staff of the Points West Bank in downtown Sidney for making the bank a fun place to work

“This is a good place to work,” she said.

She described the fun times at the bank, how staff celebrated birthdays, time was allowed for school events.

She describes a community banker’s job as being a partner with the customer.

“Basically, you’re a caretaker and a teacher at the same time,” she said.

She said the job involves securing a client’s funds, and helping them manage it the best they can. Spending several years in one location, she has developed relationships with customers, just as what made her time at the Dalton cafe enjoyable — the people.

“When you’re here this long, they (customers) turn into friendships. A lot of them like to talk,” she says. “It’s really a great way to learn relationships.”

Banking fits her. She says she loves the challenges of seeking the number out of place, the needle in a haystack.

“Retirement” doesn’t mean she will not keep busy. She has family, and a greenhouse project.

“I have grandkids. I’m sure they will keep me busy,” she said.