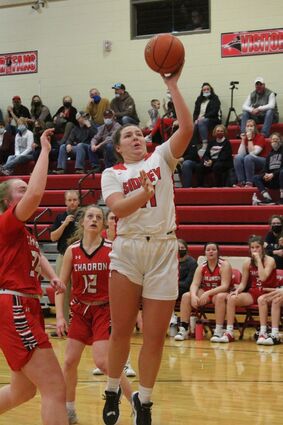 The Lady Raiders started their week with a game against Alliance on Tuesday February 9, in their third match up of the season, and like the two previous contests, the Sidney girls had no trouble with the Lady Bulldogs. After building a 47-to-10 lead a the half, the Lady Raiders coasted the rest of the way and secured a 40 point 64-to-24 victory.

Next up, Sidney faced Ogallala on Tuesday February 16 in the first game of the the C1-12 Sub District Tournament, a team they had played previously and defeated by a 10 point margin. Sidney started fast, opening a 6-to-2 lead until the Lady Indians came back to tie the score at 6-to-6 midway through the first period. Sidney ramped up the defense and shut down the Ogallala scoring and started pulling away through the rest of the half. Senior Karly Sylvester was a force under the boards, putting up short shots for points and pulling down rebounds to keep the offense scoring during the first minutes of the second quarter. But Ogallala hung tough and Sidney had a cold spell, allowing the visitors to claw back and narrow the Lady Raiders lead to two at the end of the half, 25-to-23.

The physical play of the teams continued into the the third quarter, with Ogallala briefly narrowing Sidney’s lead to just one point, as the Lady Raiders had trouble scoring anywhere except under the basket. But Sidney was able to continue their great defensive play and didn’t allow Ogallala the chance to take advantage of the cold shooting spell, and the Sidney offense got back in their groove in the final minutes of the quarter to open an eight point lead at 38-to-30 going into the fourth quarter. Sidney continued the defensive pressure and matched the Lady Indians’ scores during the fourth period to pull away and earn the 56-to-45 victory, and a match up against Chadron in the Sub District finals. Sylvester led the Sidney offense with 22 points in the victory.

On Thursday, the Lady Raiders faced off against Chadron, a team they had struggled against in their previous two meetings this season. However, Sidney turned the tables on the Lady Cardinals, coming out fast and playing tight, aggressive defense. The low-scoring 11-to-5 first period indicated what was to come for the rest of the contest. The Lady Raiders had trouble drawing fouls in their last two contests, and converting free throws when they had the opportunity. But in this game, Sidney did a great job using Chadron’s aggressive defense to their advantage, limiting their fouls while going 21-of-30 from the charity stripe, which was a huge factor in the game. Karly Sylvester was able to outplay Chadron 6’3” senior Anika Burke under the boards, and piled up the points for Sidney at close range. Sidney built a solid 24-to-17 lead at the half, and although they went through a scoring drought early in the third period, a layup by junior Brynna Ross at the end of the quarter gave Sidney a 10 point lead going into the final frame.

Chadron came out playing hard in the fourth quarter, but had trouble converting field goals while racking up fouls and mistakes passing the ball. Sidney took advantage, continuing to score and sinking free throws down the stretch. The tough and physical play continued through the remainder of the game, but the Lady Raiders did not falter and took the C1-12 crown with a convincing 57-to-37 victory. Sylvester again led the scoring with 19 points in the win to improve their record to 17-and-6. Next up, Sidney travels to Kearney to face the 17-and-5 Auburn Lady Bulldogs for the District Championship and a trip to the State Tournament. Sidney Head Coach Tyler Ross said of the upcoming match up, “Auburn has beaten some very good teams and has a good group of shooters. We need to continue our solid defensive play and hit some shots to be able to beat them.” The game is scheduled for Friday February 26 at Kearney High School. Tip-off is at 5 p.m. Mountain time.