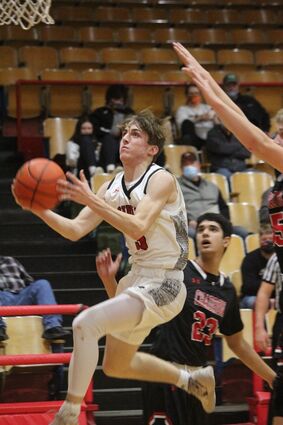 Sidney’s Red Raider Basketball team went into the B-8 Sub District Tournament playing some of their best basketball, defeating Chadron and losing a close matchup against number one seeded Alliance last week.

On Thursday, the teams matched up at the Sidney Middle School gym due to the girls’ Sub District Tournament being played at the High School, and the low-scoring game started with Sidney opening a lead early and both teams playing tough defense, with turnovers and steals disrupting the scoring.

Chadron narrowed the lead in the second period, but the Red Raiders went on a run to open a double digit lead, then hung on through the rest of the game to take a 53-to-39 victory.

Sidney then faced Alliance on Friday, having lost to the Bulldogs twice earlier in the season by double digits. But in this match up, it was the Red Raiders that came out fast, going up 5-to-0 in the first minute, and led until Alliance senior Crayton Cyza connected on a three point shot to give the visitors a 12-to-11 lead. The Bulldogs led 14-to-13 at the end of the first period, and continued to build on that lead, going into the halftime intermission up 31-to-23. At the close of the third period, Sidney sophomore Micah Schneider hit a three point shot followed by sophomore Nolan Hofrock connecting from beyond the arc to narrow the Alliance lead to one point.

A buzzer-beating three pointer by Alliance gave the Bulldogs a four point lead, 42-to-38, going into the final period.

Sidney gave it their all in the fourth quarter to get the upset, but the Bulldogs hung tough and converted on the charity stripe to maintain their lead, and the Sidney comeback stalled with the Raiders falling by a final score of 53-to-47. Schneider led the scoring for Sidney with 14 points in the loss, and Sidney’s record moved to 11-and-10 on the season. Sidney was scheduled to match up against Scottsbluff Monday night in the first round of the B-8 Sub District Tournament in Alliance.