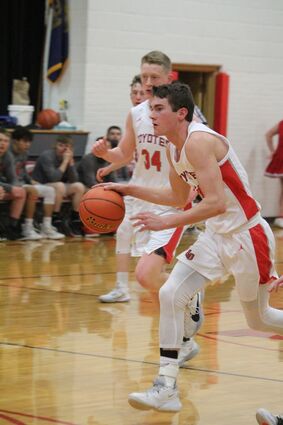 Potter-Dix’s Coyote Basketball team ended their impressive 2020-21 campaign with a loss in the D2-5 District Finals against a Loomis Wolves’ team featuring tough defense and a highlight-reel performance by junior Quinn Johnson.

The Wolves got an early jump in the game, rattling off 15 unanswered points while the Loomis defense jammed, disrupted and caused turnovers and poor shot selections by the Coyotes. Potter-Dix junior Thomas Muldoon finally got the Coyotes on the board with a three-point hit, then followed it with another three pointer from well beyond the arc, but six points was all the Potter-Dix squad could muster in the first period and they trailed 21-to-6 going into the second period. Sophomore scoring leader Luke Kasten finally got on the board early in the second period, but the Wolves’ defense kept disrupting the Potter-Dix offense, forcing many long shots that missed.

Loomis’ Quinn Johnson took over the game, scoring 11 of the Wolves’ 13 points in the period, cutting through the Coyote defense to score driving the lane, then connecting from the outside with field goals. Johnson was also sterling at the charity stripe, giving the Potter-Dix squad no relief or chances to reverse the momentum of the game.

Down 34-to-16 at the half, Potter-Dix looked defeated coming back out on the court for their warmups, and Loomis again started hot, and kept scoring through the period. Johnson’s drives to the hoop and outside shooting could not be stopped by the Coyotes’ defense, and although the Potter-Dix defense improved and tightened in the second half, the Coyotes could not capitalize on their improved play and fell further behind, 60-to-32 at the end of the third period. Loomis added another 23 points in the final frame to end the game in a lopsided 83-to-45 victory, ending the Coyotes’ season.

Johnson finished with 41 points in the game for Loomis, while the Wolves held standout Luke Kasten to just 14 points, with the majority coming after Loomis had opened an insurmountable lead. Potter-Dix finishes with an 18-5 record and a Sub District Championship, just two years removed from a winless season. Look for the Coyotes to continue to improve with a solid core of underclassmen returning for Potter-Dix.