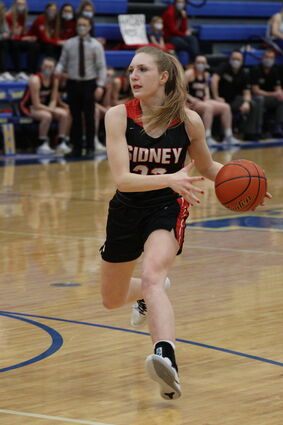 Sidney’s Lady Raider Basketball team lost to the Lincoln Lutheran Lady Warriors 50-to-23 in the first round of the NSAA State Tournament in Lincoln last Thursday.

It marked the fifth consecutive year Sidney has earned a trip to the State Tournament, but lost in their first round game. Although the team fell short of their ultimate goal, the season overall was a big success earning a Sub District and District Title and an 18-and-7 season record.

The team endured a season of challenges, from COVID-19 protocols to finding the right mix of players to succeed. After a loss to Chadron in the Western Conference Tournament at the start of the season, the Lady Raiders went on a tear through the month of December, before back-to-back losses against Ord and Holdrege cooled the team off.

The team resumed their fine play, only losing to North Platte, Scottsbluff and again to Chadron. As the season wound down, the Lady Raiders’ defense proved to be their strong point and they rattled off big wins going into post-season play, capped by a 20 point dismantling of Chadron in the Sub District Finals and an impressive 43-to-24 victory over Auburn in the District Finals, earning Sidney a trip to the State Tournament

Their opponent in the first round was Lincoln Lutheran, a team that had a turnaround from an 11-and-11 record last year and went into the tournament sporting a 19-and-2 record. Sidney Head Coach Tyler Shaw’s scouting of the team showed an athletic and long team that used pressure and trapping schemes on defense and had a group of talented shooters. Led by 6’3” senior Katelyn Oxley, the Lady Warriors proved to be a tough first-round draw for the Lady Raiders.

The first quarter of the game was dominated by both teams strong defenses disrupting scoring attempts, with Sidney closing the gap after Lincoln Lutheran opened the game with a 4-to-0 lead. Lady Raider sophomore Rheagan Stanley drained a three point shot in the closing seconds of the quarter to get Sidney to within three at 9-to-6 at the end of the first period.

The second period started with the Lady Warriors increasing the tempo of the offense and getting better looks while Sidney struggled to connect from the field. Two minutes into the period had the Lady Warriors increase their lead to 10 at 18-to-8, while the Lady Raider offense was smothered with pressure and traps, preventing them from getting off effective shots. Sidney senior and leading scorer Karly Sylvester finally got her first and only points of the game with around two minutes left in the half, a testament to the effectiveness of the Lincoln Lutheran defense.

The Lady Warriors outscored Sidney 19-to-5 in the period, and took a 28-to-11 lead into the intermission. The Lady Warriors were able to make adjustments to beat the Sidney defense in the second quarter, while the Lady Raiders were unable to get comfortable on offense.

A slow start to the second half had both teams trading missed shots and turnovers, but as the third frame progressed, the Lady Warriors started to score. The Lady Raiders continued to struggle on offense, being locked out of the inside by the Lady Warrior defense and putting up too many long distance tries. Lincoln Lutheran outscored Sidney in the third quarter 12-to-4 to increase their lead to 40-to-15, and any chance of a Sidney comeback was vanishing quickly.

The relentless trapping of Lincoln Lutheran continued into the fourth quarter, and the Lady Raiders tried aggressively to break through and get good looks, but the Lady Warriors continued their strong defensive play while continuing to score, and the game ended early with substitutes playing a large part of the last frame, and Lincoln Lutheran taking the victory by a final score of 53-to-20.

It was by far Sidney’s lowest score by its offense all year, as they never able to get their inside game featuring 6’0” Karly Sylvester going, and the Lady Warriors did a great job in limiting drives through the lane by junior Alecca Campbell and senior Morgan Jaggers who led the offense with four points each in the loss. Shaw commented after the game, “Lincoln Lutheran’s length and athleticism made navigating their multiple presses a big task. They played a very good game on offense as well, as they shot the ball well from the outside.”

The Lady Raiders went a long way this season, which was an impressive feat considering the amount of questions the team had at the start of the season. Lost from graduation were last year’s starters MJ Johnstone, Mattie Johnson and Nicole Birner, and Sidney’s underclass players had big roles to fill quickly to ensure a successful season.

This year’s team compared well with last year’s teams’ 18-and-7 (4-and-1 in league) record, plus won their Sub District Final game, a contest last year’s team lost to Scottsbluff. “Although the State Tournament game didn’t go the way we wanted it to, I am proud of the girls and the season they had overall. It’s a great accomplishment for them to be a district champion once again and play at the states “, said Shaw.

Look for Sidney to again be at the top of the C1 rankings as although they will lose team leaders like Karly Sylvester, Morgan Jaggers, Jersie Misegadis and Reagan Biesecker to graduation, the Lady Raiders have a strong and experienced group of younger players ready to step up and work within a system that has brought the team much success over the years.