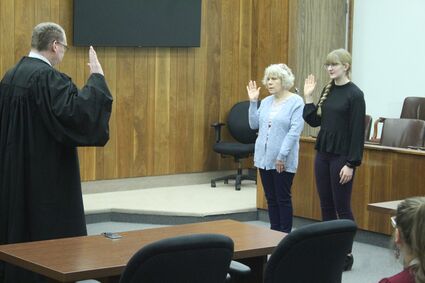 The ceremony was small but the importance of the duties were just as clear. Two more people stood up for children in the court systems.

Deanna Aurich and Jacobi Popp were sworn in by Judge Randin Roland Thursday, March 18, at the Cheyenne County District Court Room as the newest members of PlainsWest CASA.

“I taught school for more than 30 years,” said Aurich. “I thought this is something I could do to help kids.”

She said she has always had a soft spot for children who “had a strike against them” through no fault of their own.

She said she was shocked to learn in the training how much some children go through.

“I think when I get my first case, I'll be nervous; they (PlainsWest CASA staff) will be there to help.”

Popp has a heart to help those in need, involved in volunteer work and having started a program while in college. Having worked with abuse victims and children, she was drawn to CASA

She said training taught her to see the child's side of a situation.

Plains West CASA is an organization that works with the courts to provide volunteers who work closely with the courts to represent the interests of children within the court system. The mission of PlainsWest CASA is to advocate for the best interests of abused and neglected children who are involved in the juvenile court system by addressing the health, safety, permanency and well-being of each child, according to a PlainsWest CASA fact sheet. With Thursday's ceremony, PlainsWest CASA has 31 volunteers, the most since the inception of the PlainsWest office. As of March 18, there are 27 3a juvenile cases in Cheyenne, Kimball and Deuel Counties.; 27 have a CASA assigned to them.

April is recognized as National Child Abuse Prevention Month. PlainsWest CASA will be hosting several activities to raise awareness in the area including pinwheel gardens across Cheyenne, Kimball and Deuel counties; hosting a guest speaker at schools, a t-shirt fundraiser sale, and “Blue Fridays.”

In May, PlainsWest CASA plans to host its second annual 5K Superhero Run; everyone is invited.

In 2019, 912 Nebraskans volunteered as advocates for children. That year, 2,031 children in Nebraska had a CASA volunteer. Even with the increased number of children served, there is an estimated 1,500 children who go without an advocate.

The program began in 1977 when a Seattle, Wash., juvenile court judge concerned about making drastic decisions with insufficient information came up with the concept of volunteers representing the interests of abused and neglected children in the courtroom. That idea has grown to more than 955 CASA programs in 49 states.