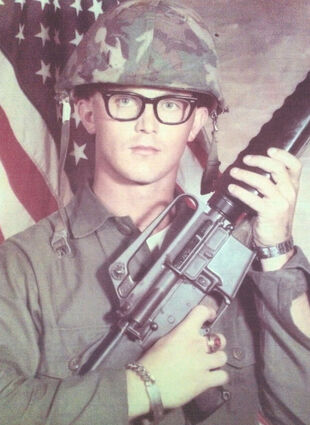 Cremation has been held and a graveside service with full military honors will be held in the Nebraska Veteran’s Cemetery at Alliance, NE on March 25, 2021 at 2:00 P.M.

There will be no visitation.

Leroy was born in Sidney at the Thayer/Cook Hospital on Illinois St. to Raymond F. Stark, Jr. and Trixie L. (Munger) Stark. He resided at the Sioux Villa area for the first couple of years and then moved to the Army Depot, west of Sidney, where he lived until 1965 when his father, who worked as a civilian for the government, was transferred to Romulus Army Depot in New York State.

Upon his father’s retirement, they moved back to Sidney. Leroy served a term in the Marine Corps, which was the proudest moment of his life. Upon discharge, he returned to Sidney where he worked at Cabela’s Warehousing for a number of years until the time he developed back problems that forced him to leave the working community.

He was preceded in death by his father (Raymond F. Stark, Jr.) and by his mother (Trixie L. Stark (Munger)) and a younger brother (Richard L. Stark), who died in his infancy.