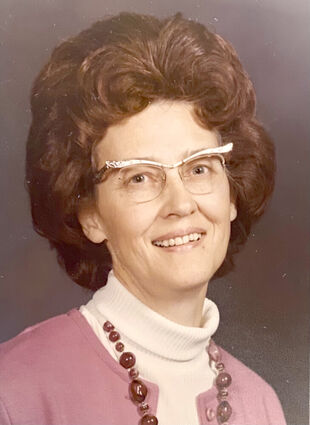 Shirley L. Cruise, age 90, of Dalton passed away Thursday, March 18, 2021 in Sidney. Funeral services will be held at 10:30 A.M. Wednesday, March 24, 2021 at the United Church of the Plains in Dalton, NE with Pastor Leon “Bud” Gillespie officiating. Interment will be in the Dalton Cemetery.

Friends may stop at the Gehrig-Stitt Chapel on Tuesday from 1-6:00 P.M. to sign Shirley’s register book and leave condolences for the family. You may view Shirley’s Book of Memories, leave condolences, photos and stories at http://www.gehrigstittchapel.com. Memorials can be made to the Shirley Cruise Memorial Scholarship Fund, PO Box 215, Dalton, NE. 69131.

Shirley Lavon Rose was born on April 30, 1930, on a farm west of Dalton, NE to Francis E. and Lorena S. (Jurgens) Rose. She attended kindergarten and first grade in Gurley, NE while living with her grandmother, Mae S. Rose, and then District #142 west of Dalton. In 1940, the family moved to the farm east of Gurley. They were members of Grace Lutheran Church, where Shirley was baptized and confirmed. She graduated from Gurley High School in 1947.

After being inspired by her business and shorthand teacher in high school, Shirley decided to enroll at the University of Wyoming in Laramie, majoring in business education. She graduated in 1951 with a B.S. degree, becoming the first woman in both families to graduate. Her first year of teaching was at Chadron High School.

On November 22, 1951, she became engaged to Glen Willis Cruise of Dalton, and they were married on June 22, 1952, at Grace Lutheran Church in Gurley. To this union three children were born: Jane, Jeffrey, and John. They lived in Dalton for a couple of years, where Shirley taught business. The family then moved to McGrew, NE. and she took a position at Bayard High School. Shirley and Glen moved the family to Lisco, NE before returning once again to Dalton in 1960, where she would teach for the next 33 years. She cherished her students and enjoyed hearing from them in her later years. She was the prom and graduation sponsor, and she never overlooked the slightest detail. She was not afraid of innovation and change, as her classroom was one of the first in the state to replace typewriters with new Apple 2Gs computers.

Shirley was an avid reader and loved caring for her house, flower beds, and her two special cats Blue Boy and Abby. She lovingly doted on her grandchildren, who called her “Oma” and that tradition continued with her great grandchildren. After retiring from Leyton High School in May of 1992, she enjoyed traveling and taking fieldtrips with her sisters Marnie and Frannie.

Preceding her in death are her parents, her husband in 1988, sister Francine and husband Donald Bremer, father and mother-in-law Benjamin and Kathryn Cruise, brother-in-law Darrell Cruise, and sister-in-law Barbara and husband Elwin Linton.

We love you more!