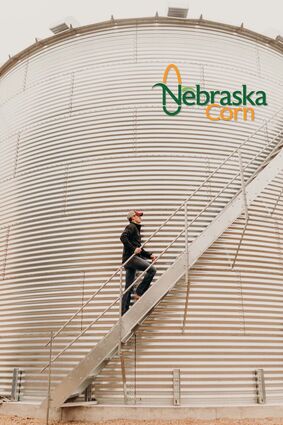 LINCOLN – Nebraska farmers continue to be good stewards of the land, producing more bushels with less resources. Because of this increased efficiency, on-farm grain storage is on the rise. With additional grain bins on farms and on commercial sites, there is a greater risk of fatal accidents. The checkoff organizations of Nebraska’s corn, soybean, wheat and sorghum industries (and their respective associations), remind farmers and agricultural workers to be safe in and around grain bins during the fifth annual “Stand Up 4 Grain Safety Week.”

“Stand Up 4 Grain Safety Week” takes place March 29 through April 2 and is organized through an alliance between the Occupational Safety and Health Administration (OSHA), the U.S. Department of Labor, the National Grain and Feed Association, the Grain Elevator and Processing Society and the Grain Handling Safety Council.

“Farming is one of the most hazardous industries we have in the United States,” said David Bruntz, chairman of the Nebraska Corn Board and farmer from Friend. “We often hear of unimaginable accidents in agriculture because there are a lot of moving parts and large pieces of machinery to work with. Nebraska Corn regularly reminds farmers to take a second for safety, because many accidents and fatalities can be prevented with just a little added caution.”

There are several hazards associated with grain bins, including engulfments and entanglements. An engulfment happens when grain flows downward and forms a funnel, pulling a person down to the point of full immersion. An entanglement could occur when farmers or agricultural employees work in close proximity to grain augers. The danger in operating an auger is getting caught in a moving part.

“As we look at engulfments and entanglements, there’s a common theme, which is they both happen quickly,” said Eugene Goering, chairman of the Nebraska Soybean Board and farmer from Columbus. “The risk is high for both young and old, those new to the occupation and those who are seasoned farmers. It’s essential everyone working in and around grain bins educates themselves about proper safety protocol.”

With the proper safety procedures, grain bin accidents are preventable. It is important to follow all the safety rules when it comes to working with grain stored in bins. Here are a few grain bin safety tips to keep in mind when you are working with stored grain:

• Use inspection holes or grain level markers to understand what is happening inside the bin. Use a pole from outside the bin to break up grain bridges.

• You should enter a grain bin only if absolutely necessary. If you must get into the bin, use a body harness secured to the outside of the bin. Have at least two people watching over you as you enter and work inside the bin.

• Use hand signals to communicate—and make sure everyone you are working with knows what those signals are.

“We know farmers are anxious to get back in the fields this spring, so many are now busy working with their previous crops stored on-farm,” said Bob Delsing, chairman of the Nebraska Wheat Board and farmer from Hemingford. “By dedicating a week to the importance of grain bin safety, we can hopefully serve as that friendly reminder to always be prepared, knowledgeable and responsible when working in and around grain bins.”

Throughout the week, Nebraska’s corn, soybean, wheat and sorghum checkoffs and their respective associations will be sharing grain bin safety tips from their social media channels. More information can also be found at standup4grainsafety.org.

“We know farming is a risky business but through proper safety procedures, we can greatly reduce the chance for injury or even death,” said Mike Baker, chairman of the Nebraska Grain Sorghum Board and farmer from Trenton. “A few extra moments of caution far outweigh possible accidents.”