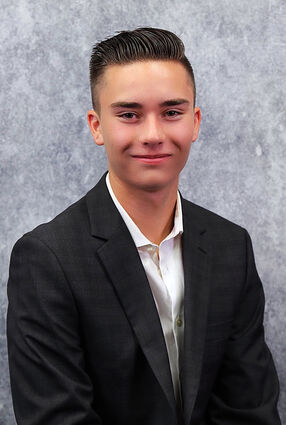 Teenagers have views of life being wide open, quietly and not so quietly thinking themselves indestructible and spend their time proving how right, or wrong, they are.

That all sounds good until life suddenly changes for no apparent reason. What started as minor deformity quickly became a journey that is just getting started.

Kobe Peterson is a 15-year-old freshman at Sidney High School. He is also a young man facing a rare disease that has symptoms a teen doesn't want to face, symptoms that can seem debilitating.

“It all started about a year ago,” Peterson says.

He says he developed curvature in a pinky finger. He was scheduled for a visit with a hand surgeon. X-rays showed his hand was “beyond normal.” The next step was an EMG, a nerve study, with a Dr. Swenson. The procedure included what he describes as a long needle with a microphone on it.

“They listen to your muscles,” he said. “This test was painful.”

Unfortunately, the journey of discovery was just getting started. His next step included meeting Dr. Yang at Children's Hospital in Denver. Dr. Yang repeated several of the tests that had already been conducted by other doctors.

Peterson said Hirayama's Disease is primarily found in people of Asian descent. He said he was told the disease is even more rare in both hands of a patient.

“I'm the whitest guy you know,” he said.

Disabled-World.com adds “On rare occasion, the weakness associated with Hirayama's disease may progress to the person's opposite limb. There is also a progressive variant of the disease that is referred to as, 'O'Sullivan-McLeod Syndrome,' which affects only the small muscles of a person's hand and forearm. O'Sullivan-McLeod syndrome also has a course that progresses slowly.“

The bad news is so far there is no cure. Basic tasks like dressing himself, eating, any task that requires dexterity and strength in his hands are now in question.

They applied to the Mayo Clinic to get more specialized treatment.

“We were out there three days,” he said.

During the three days, he underwent as many as 14 procedures, including a second EMG. The doctor of pediatric neurosurgery he met with said he had never heard of this disorder. Spinal fusion was suggested. He said at 15, “I was a little concerned.”

“What happens when arthritis sets in,” he said.

Peterson and his family then met with orthopedic surgeons regarding the option of nerve transfer. The concept is to connect a nerve that is not responding as it should to one that is working correctly with the hope the nerve will regenerate. The good news is he met a guy from Wisconsin who underwent the procedure.

That option is still being considered. In October 2020, he had a spinal fusion, a procedure that lasted 5 ½ hours.

The changes in his body take their toll physically and emotionally. He no longer takes simple tasks for granted. Each day, each accomplishment, is an achievement, a mark in the win column.

“It's been a long ride, and its not over,” he says. “Everything happened so fast.”

The year or so making his way into confronting the Hirayama's Disease has not been easy. It has taken Kobe and his family into challenges no one would ask for.

“The journey wouldn't have been possible without my family and friends,” he said. “When I was first diagnosed, I fell into a deep depression.”

He said he's not sure the depression is completely gone. There is still a lot he has to go through.

Among the challenges is the social element. There is the name-calling that happens; sometimes by people who don't understand there is a disease ravaging him physically even when it doesn't appear so. He also needs to rely on his mom, his family, sometimes for what was the most basic of tasks.

“I think it hit my mom really hard,” he said.

Through it all, he doesn't stop. He had started a lawn maintenance business before his diagnosis, and continues to work at keeping it operational. He has had the business about three years. As the disease started to develop, the question of his business's future needed answered. Last year, they bought a second Walker mower. At first, they thought the business would be impacted by the disease. He has a friend, John Meza, helping him. They maintain up to 30 customers in mowing, edging and de-thatching. He also has resources for treating lawns.