I Would Have Fired Me 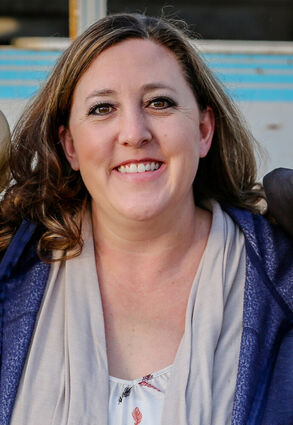 Let’s just cut to the chase. I ran the pick-up off of a bridge.

I may or may not have continued to go straight when I needed to turn. This is very far from my normal, but the Lord worked so hard on my humility the other day that I didn’t just eat a small piece of humble pie – I ate the whole pie.

It started out as a simple request, “Babe, I think you could help me move some cows from one pasture to the processing pens, by using the feed pick-up to lure them with a bale of hay.” Little did he know just how helpful I was going to be…

We have one of those transformer type trucks that has robot arms that rotate and squeeze and do amazing things like pick up 1500 pounds of rolled up hay. This is an awesome feature if your feet reach the pedals of the pick-up while also trying to look over your shoulder to see if you are even loading the bale.

I look like Great Grandma Orpha power-braking through the pasture backwards when I try to load a bale. The seat is not adjustable, anymore, and I really struggle to run the controls while looking over my shoulder and driving with my incredibly short legs. It is not an excuse, but my reality.

Ultimately, I had victory over the bale of hay and loaded it on the bed of the truck. I only broke into a small sweat wondering if I could accomplish the feat before the herd was nearby. I won.

I then managed to find the correct “road” in the pasture. Merciful heavens, there is nothing that creates more anxiety in me than when my cowboy suggests that I just “follow the trail road.” Normally, most “roads” are wandering cattle trails that the cowboys drive on, but are no road at all. Again I had victory.

I felt like I was moving at an appropriate rate of speed – not too fast as to have the cows start a stampede and not too slow that they would gobble all of the hay off the back of the truck before we reached our destination.

My two oldest ‘pokes were helping my cowboy move the cows from the back and I was happily doing my part. Then, I drove off an irrigation bridge. We talk to our sons about safe driving procedures and I manage to drive off a bridge right in front of their eyes. Speaking of eyes, I thought theirs were going to pop out of their head. Even the cows were shocked.

As I was hanging out there perched on the left front axle, my cowboy suggested I slowly exit the vehicle. His voice was patient and clear. As I opened my door I thought about just jumping into the ditch to hide from whatever would need to happen next to undo what I had just done.

With his long legs he hopped into the truck, used the robot arms to flip the bale of hay back toward the ground, gave himself some great leverage, threw it into reverse and drove it back off the bridge. I was in utter shock.

First, that I had done such a ridiculous thing and that he so quickly fixed my error. It was a pretty amazing moment.

He should have quietly turned to me and fired me right then and there…but where else can you get such good, free help. I guess bad help is better than no help at all.

My cowboy disagrees with the last statement.