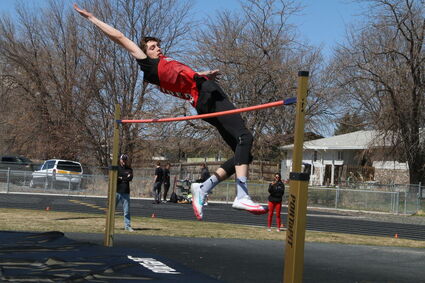 Sidney’s Red Raider Track & Field teams had an outstanding outing at the Mitchell Invite on Thursday, with both the boys and girls squads winning in dominating fashion.

For the boys, the running events started with Sidney freshman Luke Holly taking third then second place in the 100 Meters and the 200 Meters. Junior Mitch Deer placed second in the 400 Meters and 800 Meters, and juniors Daniel Bashtovoi and Cameron Brauer placed first and second in the 1600 Meters.

Sidney Head Coach Matt McKay was thrilled by the performances and said, “Our kids performed exceptionally well at Mitchell. We had two record-breaking performances in the Long Jump and Triple Jump, and the kids cheered each other on and the performances showed. We just want to keep the momentum rolling and see what we can do later in the season.”

Sidney was scheduled to compete at the Creek Valley Twilight Meet on Monday and the Dutch Zorn Invite at Gothenburg on Thursday, followed by the Alliance Invite on Saturday.