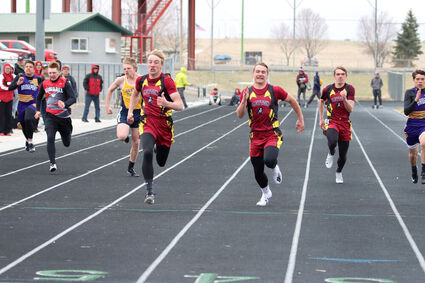 Leyton’s boy’s track and field team had a big day last Tuesday at the Tri-State Meet in Chappell, with the boy’s squad taking first place overall by a wide margin and the girl’s squad placing third overall. Eight area teams participated at the Meet, resulting in a big win for the Leyton boys, followed by Kimball and South Platte. For the girls, South Platte was the overall winner, with Bridgeport close behind and Kimball finishing third while Leyton finished fifth.

The team was back in action Saturday, traveling to and competing in the Bayard C-D Meet, and again the Leyton boys took top honors, followed by Burns and Gordon-Rushville. For the girls, Burns was the winner, followed by Bayard and Crawford. Leyton finished 12th out of 15 teams. At the Tr-State Meet, the Leyton boys filled the top slots, and won many gold medals. Junior Mason Reimers won the 100 Meter dash followed by senior Dominick Russ. Reimers also won the 200 Meters and sophomore Damyn Russ placed third. Junior KJ Bush and sophomore Justin Ernest placed second and third in the 400 Meters, while Ernest took first in the 800 Meters. Junior Scout Gamble placed second in the 110 Meter Hurdles and 300 meter Hurdles, and the Leyton boys swept the relays, winning the 4x100, 4x400 and 4x800 events. Junior Jonathan Borges won the Shot Put and Discus events, Gamble and freshman Kaleb Borges took second and third places in the High Jump, while Russ took first in the Long Jump and Reimers placed second in the Triple Jump. Their performances earned the team 184 points, putting them well beyond second place finisher Kimball with 78 points.

Medal winners for the girls included sophomore Axi Benish with a second place finish in the 100 Meters, and first place finishes in the 200 Meters and 400 Meters. The girls had various medal winners in other events, enough to score 52 points and earn fifth place overall.

On Saturday, it was another successful day for the Warriors at the Bayard C-D Meet. Medal winners for the boys included Reimers placing fourth in the 200 Meters, Ernest placing second in the 800 Meters, Gamble placing third in the 110 Meter Hurdles and second in the 300 Meter Hurdles, and the 4x100 Meter Relay team taking first place.

Senior Zack Henke won the Shot Put and placed third in the Discus and Dominick Russ won the Long Jump, giving the boys 80 points and placing first for the Meet. For the girls, Benish placed fifth in the 100 Meters, fourth in the 200 Meters and third in the 400 Meters. Freshman Claire Watchorn placed third in the 300 Meter Hurdles, and senior Sage Rummel placed sixth in the Pole Vault to earn the girls 20 points and finish 12 out of 15. The Warriors looked to keep their strong start going at the Alliance Invite on Saturday.