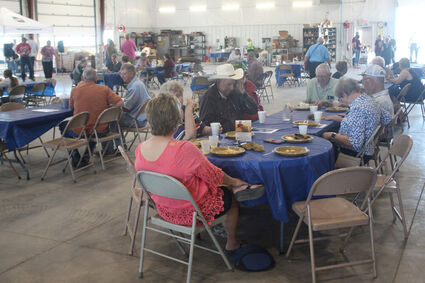 Energy production today is focused on renewable options, leaving the smallest carbon footprint possible and meeting needs consistently. It is a time when decision-makers are seeking sources besides drilling for fossil fuels.

That hasn't always been the case. Less than a century ago, energy was fuel-based. Pioneers in the area had gasoline-powered cars and trucks... as well as much of the home.

Wheat Belt Public Power District is celebrating 75 years serving parts of Cheyenne, Deuel, Garden and Morrill counties. It's future lies in its vision, and commitment to serving its customers.

“At this point, the industry is changing so rapidly after the last 50 years,” said Wheat Belt Interim General Manager Lacey Gulbranson.

She said Wheat Belt is committed to providing electric service to its rural customers. She said it is the company's goal to remain relevant to the area.

Wheat Belt Public Power District receives its power from Tri-State Generation in Colorado. Tri-State is becoming increasingly renewable-dependent. In 2019, 30 percent of the electricity produced came from renewable sources. Tri-State's goal is that by 2024, 50 percent of its production will be from clean energy sources, and by 2029 70 percent.

Gulbranson said one of Wheat Belt's biggest challenges is staying weather aware; when, where and with what severity storms will strike.

“The fewer minutes our customers are without power, the better for everyone,” she said.

Looking into the future, the new power grid will still need visionaries and pioneers.

In the 1930s, rural Nebraska was often at the mercy of the elements, including daylight. Lighting was often done with kerosene lanterns or fires.

Gas stoves were available, but the idea of electrification was still a distant dream. It was a dream separated from western Nebraska reality by the cost of building an electric network.

Wheat Belt Public Power District entered the horizon about six years after the REA was passed.

In March 1941, an organizational meeting of the Cheyenne County Rural Electrification Association was held. The meeting, held in the Legion Room of the Sidney city auditorium, included George Phillips, manager of Pine Bluffs R.E.A. Cooperative, gave a history of the REA. By the end of the meeting, 36 people voted in favor of forming a temporary organization. Art Borcher was elected chairman, Louis Miller secretary and Etheline Swanson treasurer. There were 19 precincts in the district, with one person representing each precinct. Membership fees were $5.

A few months later, plans for a local REA were put on hold as the United States entered World War II. Even with the war taking place, limited material and manpower were available to continue electrification of rural America. When the war ended in 1945, the focus returned to powering rural Nebraska. During that time, the Cheyenne County Rural Electrification Association voted to withdraw its membership from the Pine Bluffs REA. Almost a year later, the Wheat Belt Membership Association was formed.

Wheat Belt started with a name, but no money and no membership. Wheat Belt's first office was at 938 Jackson St., and Abe Moore was chosen as the first manager. Harold Spiker, secretary/treasurer to the board of directors, advanced the organization $200 to defray initial costs. A year later, Wheat Belt was showing a positive balance: 390,264 kWh sold to 319 customers generating $6,480.99 in revenue with a payroll of $512 supporting three employees, and $165.27 in expenses.

A year later, the first lines constructed by Wheat Belt were energized. Also during October 1948, Wheat Belt moved its operation to 2104 Illinois St, a building purchased at auction for $29,450. 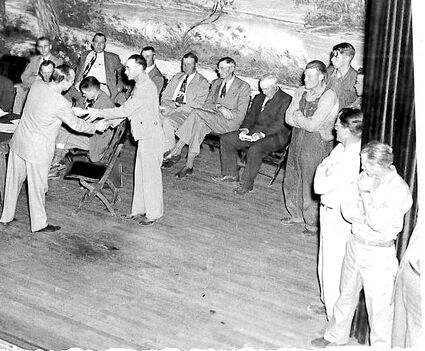 That was the forming days of Wheat Belt. In 2020, Wheat Belt had 164 miles of transmission line, 2,195 miles of overhead distribution lines and 156 miles of underground lines. Kwh sales totaled 163.5 million in 2020 with revenue topping $20 million.

In 1954, the first meeting as Wheat Belt Public Power District was held. In the early years of bringing electricity to Nebraska and specifically rural areas, much of the work was credited to George Norris of McCook, and the state legislature. The Rural Electrification Act was signed by President Franklin D. Roosevelt with Rep. John Rankin and Sen. George Norris present. Norris is credited with developing state laws that gave people the ability to form public power districts.