Cross-County for a Cure 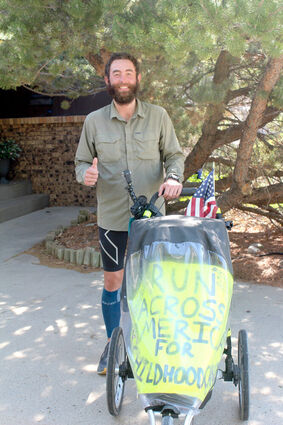 Cheyenne County had a unique visitor last week, Michael Wilson originally from Newburyport, Massachusetts. Unlike most tourists, he wasn't in the Sidney area to fill his car with gas or to get in some sight-seeing of historical landmarks. He is on a mission, a mission to traverse the Continental United States while running, to raise awareness for childhood cancer.

Currently Wilson lives in southern Maine, not far from where he grew up. Surprisingly, he was not a cross-country or marathon runner as a young athlete; his passion was football. He played in the semi-pro New England Football League (NEFL) right out of high school for the New England Hawks as a quarterback for two years in 2012-13. After injuries ended his playing career, Wilson still wanted to be an athlete, and took up distance running after leaving the NEFL. He's run marathons, ultra-marathons (50 miles plus) and other competitions in the Northeast, and works as a personal trainer as he pursues accreditation as a Physical Therapy Assistant.

He is running to raise awareness for Lucy's Love Bus and the MaxLove Project, two organizations focused on delivering comfort and aid to children with cancer. Wilson was a grade ahead of Lucy when he was a child.

“She passed away when she was 11 years old, and it really impacted the community,” said Wilson.

He has been involved with Lucy's family and the organization for many years now.

“I've been wanting to do this run across America for about 10 years now, pretty much from when I started running, it was always my “big goal.” I figured after last year with everything shutting down, this would be a perfect time to do the run and raise awareness for Lucy's Love Bus and their sister charity, MaxLove Project.

The MaxLove Project was founded by Audra and Justin Wilford in 2011 after their son Max was diagnosed with brain cancer. The MaxLove Project focuses on increasing the quality of life and reducing health risks for all children fighting cancer. Both organizations use their resources to help children with integrated therapies such as massage and acupuncture and whole-body wellness programs, education and research.

Wilson relies on his “running stroller” as he journeys through America, and the stroller is decorated with signage about Lucy's Love Bus and the MaxLove Project, but also carries his supplies as he runs across the country. Not only is the stroller necessary to carry his supplies, he's had to use it to help himself keep going when an ankle injury in Oregon started giving him difficulty.

“I don't know what was going on with my ankle, maybe some tendinitis, but I had to take weight off of my ankle for a bit because it was hurting really bad, and I was thankful for the stroller to help me get past the pain and keep going”, said Wilson.

He has a goal of raising $35,000 for the charities, and donations can be made through LucysLoveBus.org, which features Wilson's run on their front page.

“I started in Santa Monica, and was going to follow Route 66 through Arizona, but I started to late and it was way too hot to continue, so I re-routed up through Bend, Oregon to take a more northern track”, said Wilson. He anticipates the journey will take hime between 3,000 and 3,200 miles, depending on the routes he takes. Sometimes he can run along interstate highways, but some areas do not allow running on certain highways, and adjustments need to be made. He hopes to complete the run by the end of July. He currently works for Planet Fitness in Portsmouth, NH, which is sponsoring his run and keeping him employed so he can maintain his health insurance. They are also getting the permits required for a celebration at the finish line on the boardwalk in Newburyport, MA, the “finish line” of Wilson's journey.

He stayed in Sidney for two nights with Carla and Mike Brauer, who had heard about Wilson's run and contacted him through social media, and he headed into the Cheyenne County area in the midst of a heat wave that had temperatures near 100 degrees for a full week. He had previously stayed in Pine Bluffs with a childhood friend who had relocated to the town right across the Nebraska boarder. As he prepared for the day's run, he planned on taking the Lincoln Highway towards Lodgepole then on to Chappell.

He wears protective clothing to keep the sun off of him during the day, and then finds places to stay if possible at the end of day. Many times, it's camping in an area off of the road for Wilson, which entails the setting up and breaking down of the campsite, adding more work to his journey. But occasionally, local residents find out about his mission, and offer him a place to stay and a home-cooked meal for the night, which is a blessing for Wilson.

Wilson has attracted a following on his run through social media, and has even had other runners join him for segments of his journey. So far, he says the most impressive area he's run through has been the Tetons in Idaho. During the day, he mostly consumes sports drinks for the electrolytes the offer to maintain his energy levels. While he prepared to leave Sidney and continue his journey along the Lincoln Highway, I asked if his sneakers had been melting to the pavement as he ran. He looked at the bottom of his sneakers and said, “Oh yeah, look at that!”, noting the treads around the edges of the sole had been melted and worn down. “It will be time for new running shoes soon,” he added.

Wilson's run highlights the personal challenges people accept for themselves while hoping to help others, and have an impact on other people's lives as well as their own. Regardless of the outcome of Wilson's run, he will have a story to remember for the rest of his life, and appreciative parents and children of families who battle childhood cancer every day.