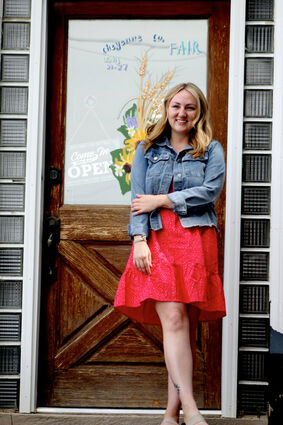 Carnahan-Kuhns takes over for Hope Feeney. Feeney and her husband Eamonn have accepted education positions at Maxwell High School. Feeney's last day at the Chamber is scheduled for July 23. She is assisting Carnahan-Kuhns with the transition into her new role as Chamber president and CEO.

“I think McKailie is doing a good job so far,” Feeney said Friday. “I'm really excited about the future of the Chamber.”

Like Feeney, Carnahan-Kuhns is locally born and raised, and has seen other parts of the world. She is a Sidney native who has also lived in Fort Collins, Sterling, Texas and the east coast before returning to the Panhandle area.

She came to the Chamber through a series of events including her own photography business working with area businesses. She sees the combination of valuing the local community and experiencing places outside of her hometown as an advantage. She said she has seen amazing places, but the people just aren't home. It is the people who make the difference in Sidney and Cheyenne County, she says.

“I think the best part is we have so many good people,” she said.

She said there are many people who want to see the area succeed.

“I feel like we have an amazing support system,” she said.

In her second week on the job, she is learning the Chamber is involved in numerous projects.

“We have so much going on,” she said.

She has ideas for the Chamber, but she also wants to hear from the community.

“I really want to get out there and start talking to the community,” she added.

She said she wants to hear what people want and need, and how to accomplish those goals.