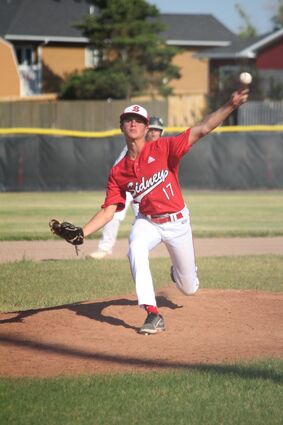 Sidney’s American Legion Post 17 Junior Baseball team hosted Fort Morgan on Wednesday, June 16, and the teams battled through the late afternoon heat to find themselves tied at 6-to-6 at the end of six innings.

In the top of the seventh, Fort Morgan was able to scratch out a run, but Sidney’s Reid Fiscus battled hard on the mound, loading the bases then working out of the jam to keep Sidney in the game.

Sidney was able to plate a run to keep the score deadlocked in the eight, when Fiscus returned on the mound for the seventh inning. A great curve ball struck out Fort Morgan’s first batter, then another good curve ball by Fiscus induced a groundout. Fiscus gave up a single, but then recovered and got the final out of the inning on a ground out to shortstop. In the bottom of the eight, Owen Gillham was hit by a pitch to give Sidney a base runner, but with two outs Lando Riddle laid down a bunt but the Fort Morgan third baseman made a great play an ended the inning by throwing out Liddle at first base.

Fiscus took the mound again for the ninth inning and issued a lead off walk. Fort Morgan bunted the runner to second base, then a base hit to center field gave the visitors runners on first and third with one out. The runner at first moved to second via a steal, then Fiscus struck out the batter to give Sidney two outs.

Fiscus then hit a batter in the helmet, and although the batter was not injured, it loaded the bases for Fort Morgan. A pop fly to centerfield couldn’t be handled, and Fort Morgan scored two runs to take a two-run lead going into the bottom of the ninth.

Sidney fought back in the ninth when Blaine Russell blasted a lead off double to the outfield, then Jakob Meyer hit a long drive to the left field wall for a double, scoring Russell. But Sidney’s next three batters were retired via strikeout, then a fly out to center field, then finally a groundout to the pitcher to stop the rally and give Fort Morgan an 8-to-7 victory.