Seniors Come Up Empty at Alliance 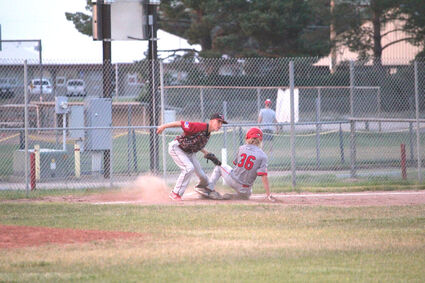 Sidney’s American Legion Post 17 Senior Baseball team traveled up to Alliance for weekend tournament play Friday and Saturday, and came up empty with three losses for the trip.

On Friday, Sidney started the tournament by squaring off with Torrington, and after pitcher Sam Hashman retired the side in order to start the game, took a one run lead early when Austin Wolfe got on base with a single, then came around to score on a passed ball. Torrington was able to notch two runs the next inning off of two singles and a walk in the second inning, then extended their lead by plating three runs in the top of the third off of a triple, two singles and a double to extend their lead to 5-to-1. Sidney chipped away at the lead with a run scored by Micah Schneider in the bottom of the third and then another run by Wolfe in the bottom of the fifth inning to make the score 5-to-3. A triple, double then a single powered a two run inning for Torrington in the seventh inning to move the score to 7-to-2, and Sidney went down in order in the bottom of the frame to end the game in a 7-to-3 loss for the Post 17 Seniors. Austin Wolfe had two hits and scored two runs in the loss. Sam Hashman started the game for Sidney on the mound, and went 2.2 innings, giving up six hits and five earned runs in the loss.

Sidney next played a familiar opponent in Bridgeport on Saturday morning, and the Bombers took an early one run lead when Bridgeport’s Scout Gamble scored from third base on a wild pitch. With two outs and runners on base from a single and a double, an additional single by Austin Lulf scored Patrick McCartney and then a double by Jakob Meyer scored Ty Stettner and Austin Wolfe to give Sidney a 3-to-1 lead in the second inning. Sidney added a run in the third, but Bridgeport was able to counter with two runs in their half of the frame to move the score to 4-to-3 in favor of Sidney. A two run fifth inning for Sidney was followed by a four run bottom of the frame by Bridgeport to give the Bombers a 7-to-6 lead. Sidney tied the game in the sixth with a run, but Bridgeport’s Jacob Kruse was able to get Scout Gamble home with a sacrifice fly to center field to break the tie and give Bridgeport the win. Ty Stettner and Patrick McCartney each had two hits and Stettner notched two RBI’s in the loss. Two Sidney errors accounted for three unearned runs in the loss.

Saturday evening, the Post 17 seniors matched up against the Alliance FNBO Spartans, and the Alliance team made quick work of the Sidney squad, putting up four runs in the first inning, five in the second and three in the third to earn a 12-to-0 victory in a shortened game. After getting two singles in the first inning, Sidney ran themselves out of the inning when Blaine Russell was thrown out at second base in a run-down. Russell took the mound in Alliance’s half of the inning and gave up a single, then hit a batter, walked a batter, then gave up a triple to give Alliance a 3-to-0 lead with no outs, and the rout was on. Alliance continued to hit in the next two innings and score runs, while the Sidney boys went three up and three down in the second and third innings, and took the 12-to-0 loss. Russell, Schneider and Meyer each had a hit in the loss.