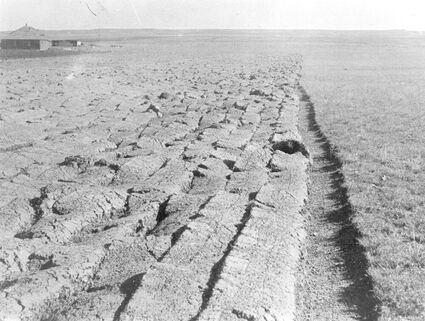 The commitment of generations of dedicated soil scientists in maintaining and managing the historic Knorr-Holden Plot near Scottsbluff for more than a century came to fruition in a recently published manuscript in Agronomy Journal.

The lead author of the manuscript, Bijesh Maharjan, is an assistant professor at the University of Nebraska-Lincoln (UNL) Department of Agronomy and Horticulture and currently manages the Knorr-Holden Plot.

He is the soil and nutrient management specialist at the Panhandle Research and Extension Center at Scottsbluff.

The history of the Knorr-Holden Plot goes back to early settlement in the Nebraska Panhandle. It is told in some detail in a 2010 booklet published on the centennial of the Panhandle Research and Extension Center:

The U.S. Bureau of Reclamation brought large-scale irrigation to western Nebraska and southeastern Wyoming by constructing the North Platte Project – one of the early projects undertaken under the 1092 Reclamation Act. To learn about irrigated agriculture, in 1910 the U.S. Department of Agriculture, in cooperation with the Nebraska Experiment Station, created the Scottsbluff Experiment Substation on 160 acres of unclaimed land 6 miles east of Mitchell.

The experiment station was eventually taken over by the University of Nebraska. While the original 160 acres is still part of the experimental plots, the main headquarters is now five miles to the south, on the northwest edge of Scottsbluff. The experiment station has evolved into the University of Nebraska (UNL) Panhandle Research and Extension Center, a unit of the UNL  Institute of Agriculture and Natural Resources (IANR).

The native short-grass prairie was broken out in 1910 and the next spring the land was seeded to oats. In 1912, under the supervision of Fritz Knorr, the first superintendent of the station, an extensive series of both irrigated and dryland rotation experiments were begun.

In 1917, James Holden became the second station superintendent to supervise the rotation plots. Under Holden’s supervision the rotation plots became a long-term project. In 1941, all but the continuous corn plots were discontinued.

Over the years, the data collected from the plot has been presented at national meetings and published in many bulletins and scientific journals.

Since 1912, at least three dozen scientists and graduate students have been involved in the plot.

The article can be accessed for free download at https://acsess.onlinelibrary.wiley.com/doi/full/10.1002/agj2.20713

Maharjan expressed gratitude to all the soil scientists, farm managers, and research technicians before him who maintained the Knorr-Holden Plot and collected research data that he could share with the world today.

“The Knorr-Holden Plot is unique as there are only a handful of agricultural research plots that are a century old in the U.S and the whole world,” Maharjan said. “The Knorr-Holden is the oldest irrigated corn research plot in the world. It was enlisted in the U.S. National Register of Historic Places in 1992 for its unique role in educational research and as a historic property worthy of preservation.”

The Agronomy Journal manuscript illustrated annual variation and long-term trends in corn yield. Because of high soil organic matter in a recently broken native sod, corn grain yield was around 50 bushels in the first year (1912). As the nutrients depleted over the years, yield decreased.

Maharjan explains that the historic dataset underscores the role of fertilization, improved genetics, and production technologies in improving corn yield.

“Furthermore, it highlights that if appropriatelymanaged, cattle manure can be an effective sustainability tool, as i recycles nutrients, enhances soil properties, and sustainscrop production. Over the years, manured plots provided a more reliable and stable yield than non-manured ones. However, the management of fertiliz ershould account for yield potential to ensure environmental safeguard.”