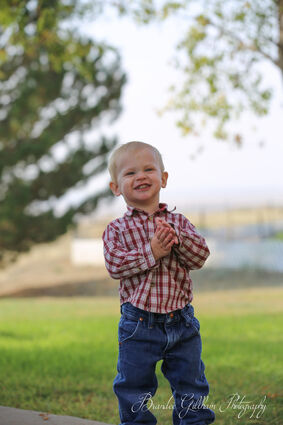 Benjamin Wyatt Gillham was born on April 10, 2019 at 2:06 a.m. at Sterling Regional Med. When Brandee found out she was pregnant with him the scripture that became his life verses were Psalm 127:3-5: “Children are a heritage from the Lord, offspring a reward from him. Like arrows in the hands of a warrior are children born in one’s youth. Blessed is the man whose quiver is full of them.” Benjamin means “son of my right hand” and Wyatt means “warrior.” Ben has been such a reward, a true delight, and brought pure joy to our lives. We have been blessed to know him and we are thankful that he was added to our quiver. He was our second miracle child that the doctors said we would never have following Brandee’s bout with cancer.

Ben was the fourth son born to Roy and Brandee Gillham of Peetz, Colorado and was fiercely loved by his parents. His three older brothers, Jake Timothy (13), Matthew Dean (11) and Waitley Thomas (4) Gillham will miss him for the rest of their lives.

We will cherish every single time we said yes to a hug or a “nuggle” (Ben couldn’t say his “s’s”). He was, by nature, a servant as he loved to help with any process that was going on. Ben was fiercely independent and despite being the fourth lil’ cowpoke he wasn’t only trying to keep up but wanted to surpass them. He could pull up his pants and get his boots on faster than his older brother and worked to beat everyone out the door.

When Ben would smile he would lift his little chin and say the loudest “cheese!!!!” in the room. He was not going to go unnoticed. His blonde hair and blue eyes were brilliant and he was so easy to love. We told him daily, “You are my favorite Ben in the whole wide world,” and this will always be true.

He recently told us he was not a baby anymore but a “big boy.” This child was simply pleasant to be around and enough of a rascal to add some spice to our family. Everyone who knew Ben loved him. After we told Ben we loved him he would repeat and say, “I love you “ho” much!” (again… no “s”).

Two years is not enough time. This pain seems unbearable. We wanted our son’s testimony to be his own, not ours, but we don’t get to choose. God’s character has not changed because of this extreme sense of loss. He is still good and Ben gets to experience heaven earlier than we ever would have expected.

Ben departed this earth on Sunday, June 27th at 5:44 p.m. at Children’s Hospital wrapped in the loving arms of his parents and surrounded by family.

Ben’s Celebration of Life is at 10:00 am Saturday, July 3, at Sterling Foursquare Church with Pastor Ben Hackbarth officiating. Burial was at the family plot on Gillham’s Rim Ranch immediately following.

A family greeting and visitation was held Friday, July 2nd from 5:00-7:30 p.m. at Chaney-Reager Funeral Home.