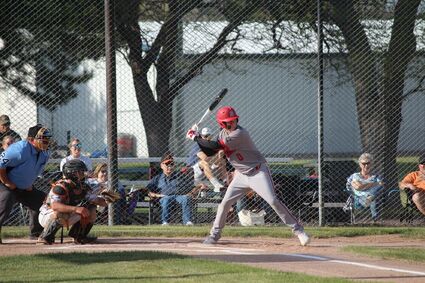 Sidney’s American Legion Post 17 Senior Baseball team travelled up north late last week, and dropped a close game to Chadron by a final score of 10-to-9, then fell to the Alliance FBNO Spartans in a lopsided rout.

On Tuesday, June 22, the Post 17 Seniors started their game with Chadron on a good note, scoring two runs by stringing together two singles and two walks. Reid Fiscus scored on a Blaine Russell single and Jakob Meyer scored by stealing home.

Meyer started the bottom of the first inning on the mound for Sidney and registered two quick outs, but then had trouble with his control, hitting consecutive batters then giving up a single to give up a run. Sidney went down in order in the top of the second, then Alliance tied the game at 2-to-2 on a passed ball.

In the top of the third, Micah Schneider blasted a double to score Fiscus, who reached base after being hit by a pitch. Russell then notched a single to score Schneider, then Landon Riddle drove a line drive double to centerfield to score another run to give Sidney a 5-to-2 lead. Sidney scored two more runs in the fifth inning when Austin Lulf singled to drive home Russell, then Austin Wolfe singled on a bunt to drive Landon Riddle home and give Sidney a 7-to-2 lead. Chadron chipped away at the Sidney lead, and scored four runs in the sixth inning. Sidney led by one run going into the final at-bat, but could not hold on with Chadron scoring two runs to pass Sidney and take a 10-to-9 victory. Sidney had 17 hits in the game, with Blaine Russell going 4-for-4 with two RBI’s in the loss.

On Wednesday, June 23, the Seniors matched up with Alliance, and after going down in order in the top of the first inning, Sidney pitcher Ty Stettner was roughed up early, giving up five runs in the first, with two coming from a Vic Hinjonosa home run over the centerfield fence. Sidney got on the board with a run when Micah Schneider was able to score on a wild pitch, but Alliance’s offense was just getting started and pounded out 15 runs in the second inning to take a 20-to-1 lead. Owen Gillham was able to score in the top of the third on an Austin Lulf single, but that was all the Sidney offense could muster. Alliance tacked on another four runs in the bottom of the third and an additional run in the bottom of the fourth, and the mercy-rule shortened game ended in a 25-to-2 loss for the Sidney squad. Sidney only managed three hits and committed seven errors in a game the team would like to forget.