Tough Week For Am. Legion Juniors

Struggle Against B&C Steel at Districts 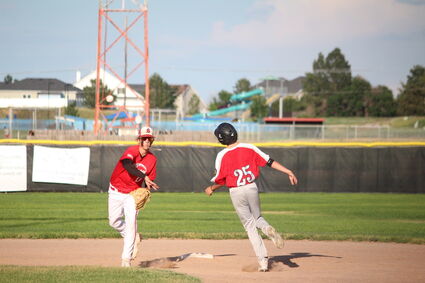 Sidney’s American Legion Junior Baseball team had two games to prior to the Distinct Tournament in Chadron last weekend to sharpen their play, but a late rally against Sheridan County did not provide enough momentum for the Juniors in District play.

The week started with the Juniors hosting Chadron on Tuesday, July 6, and Reid Fiscus started on the mound for the Juniors. After giving up a walk to Chadron’s Quinn Bailey to start the game, Fisucs struggled early but was able to get out of the inning only allowing one run to score. Sidney struck back in the bottom of the first putting together a single and four walks to score Shane Lilly and Reid Fiscus to take a 2-to-1 lead. But Chadron fired back, notching five singles to score two runs and take a 4-to-2 lead, and Sidney’s Blaine Russell drove home Owen Gillham with a single in the bottom of the second inning to move the score to 4-to-3 in favor of Chadron. Fiscus was replaced by Chris Loyd to pitch for Sidney in the second inning, and despite a good curve ball that kept the Chadron hitters off-balance, the visitors were able to continue scoring and built a 6-to-3 lead after three innings.

The Sidney offense finally got back on track in the fifth inning when a Loyd single scored Russell and Patrick McCartney to narrow the lead to 7-to-5, but that would be all the offense the Sidney boys could muster, and Chadron went on to take the contest by a final score of 9-to-5. Loyd led the offense with two hits and two RBI’s in the loss.

The juniors then traveled to Gordon on Wednesday July 7 to match up against the Sheridan County Junior Regulators, and after opening an early 5-to-1 lead, struggled as Sheridan County came back to tie the game 6-to-6 at the end of the fourth inning. However, Sidney was able to score one run in the sixth when Landon Riddle scored from third base on a passed ball, and then added three insurance runs in the seventh inning to close out the 10-to-6 victory. Patrick McCartney started the game on the mound for Sidney and pitched two and one third innings, giving up two hits and three earned runs while striking out two. Landon Riddle got on base five times, with three hits and two walks for the Juniors.

Next came District Tournament play for the Juniors in Chadron on July 9, and the Sidney squad first faced the Gering B&C Steel Junior team. Sidney had not much luck agaisnt the B&C team previously, and hoped to change their fortunes when they jumped out to an early 1-to-0 lead, scoring on a Gering error. But that would pretty much be all the scoring for Sidney, except for a run in the top of the sixth inning that did not matter, as the B&C team exploded for 12 runs, and built up a 6-to-1 lead at the end of the third. The Juniors could not figure out Gering pitcher Barron Williams, and manged just three hits and two walks against the B&C starter. Dropping to the losers bracket, Sidney waited to see who their next opponent would be in Sunday’s game, and had the misfortune of drawing the B&C Steel team again.