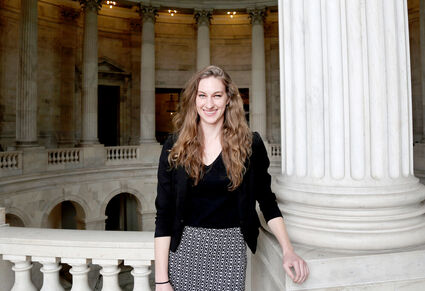 LINCOLN – Nebraska Department of Agriculture (NDA) Director Steve Wellman has announced the hiring of Cicely Batie for the position of assistant director.

Batie, who has education and experience in agricultural economics, natural resources, and trade, began working at NDA in late June.

“Cicely is a native Nebraskan, growing up on her family farm northeast of Lexington, so she understands agriculture and what the good life really means here in Nebraska,” said NDA Director Steve Wellman. “Her experience in livestock development combined with her education in ag economics will help grow Nebraska by growing Nebraska agriculture.”

Batie recently completed her Master of Science in Agricultural Economaics at the University of Nebraska–Lincoln and wrote her thesis on Nebraska’s Livestock Friendly County program which is managed by NDA.

Prior to receiving her Masters’ degree, Batie worked for Senator Deb Fischer in Washington, D.C. where she advised the Senator on agriculture, energy, environment, natural resources, and trade policy.

“Agriculture is not only a family tradition; it’s become my professional passion. I’m excited to be a part of the Nebraska Department of Agriculture in my home state where agriculture is our number one industry,” said Batie. “I look forward to learning more about the great work the Department does for Nebraska’s farmers and ranchers and to help capitalize on the many opportunities we have to promote and engage with the agriculture industry.”

Recently, Allissa Troyer and Jon Kerrigan joined the NDA team and will work with Batie in promotions and international trade.