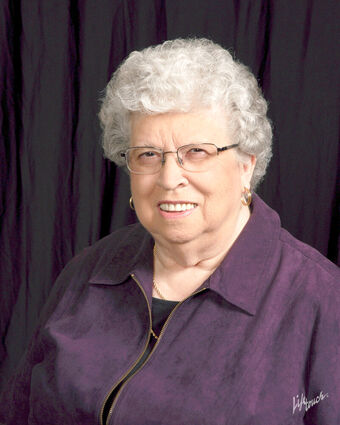 Rosary services will be held at 3:00 P.M. Wednesday, August 4, 2021 with a Mass of Christian Burial to follow at 3:30 P.M. in St. Patrick’s Catholic Church in Sidney, NE with Father C.P. Varghese officiating. Burial will be at a later date.

Friends may stop at the Gehrig-Stitt Chapel on Tuesday from 1-6:00 P.M. to sign Rita’s register book and leave condolences for the family. Family will not be present. You may view Rita’s Book of Memories, leave condolences, photos and stories at http://www.gehrigstittchapel.com. Gehrig-Stitt Chapel & Cremation Service, LLC is in charge of Rita’s care and funeral arrangements.

Rita Mae Dunphy was born September 26, 1932, in Wallace, ID, to Michael and Nellie Gray Dunphy. She attended Wallace High School graduating in 1950. After working in Wallace, she moved to Spokane, WA, and attended Kinman Business School. After finishing school, Rita began work at a local bank. Rita met Clifford at a dance in Spokane, and that’s when their love for polka dancing began.

They married on September 25, 1954, at St. Vincent De Paul Catholic Church at Burke, ID, and moved to Sidney, NE, where they raised six children, Kathleen, Barbara, Dale, Janet, Susan and Diane. They spent many Saturday nights at the Elks Club, and also traveled across the state to different ballrooms. Rita and Clifford owned Dress Janitorial for many years before retiring. Rita loved to crochet, sew and spent many summers working in her garden.

Rita was preceded in death by her parents, Michael and Nellie Dunphy, one brother, Patrick Dunphy, and her mother and father-in-law, Everard and Florence Dress.