By Submitted by Brandi Klassen 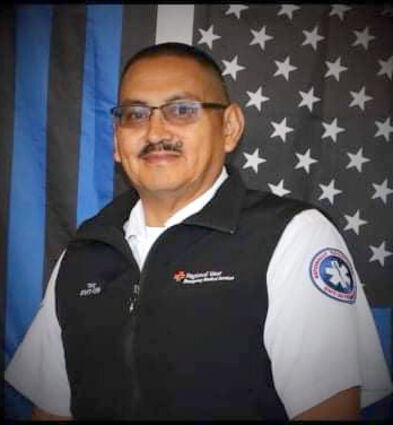 When we were kids, we looked at heroes as someone superhuman; someone who wears a cape and is faster than a speeding bullet. As we get older, we realize a real-life hero is so much more.

A real-life hero is admired for their courage and noble qualities. This is someone we can count on no matter what the circumstance. Someone who is selfless and humble. The hero of this story is Tony Balandran, who traded his cape for an EMS uniform and many other hats.

Tony is known throughout the panhandle for his happy personality and his gracious nature. His partners and coworkers always have great things to say about him. Talk to anyone about him and you are going to get the same answer, “Tony would give anyone the shirt off his back”, “Tony is my brother,” and “Tony always goes above and beyond.” It’s no surprise to hear people say all these things when you see what this man does for our community. He’s the president of the Salvation Army Board, he supports the local CASA, and he is a foster parent. These are just a few of the things he does in his spare time, but what most people know him best for is his dedication to his full-time job. He is an EMT. Most days can be seen around town on the local ambulance. Tony puts countless hours into his job and somehow still finds time to help people on the side.

Tony spent 10 years in the Army, and this is where he began his medical training. He traveled the world with NATO, and spent time in places like Belgium, Holland, Korea, and Italy. While in the Army he was sent from Germany to Texas to complete his Combat Life Saver training. After his time in the military, he decided to settle in Sidney. Little did anyone know how much of an impact he would make in this small community. Within months of moving to Sidney, Tony had already joined the fire department. When it was time for some of the firefighters to go get their EMT training, he decided that was the right path for him.

On April 28th, Tony’s life changed forever. He was experiencing severe nausea and dizziness. He went to Sidney Regional just to get checked out and to get some relief from his symptoms. Suddenly, the person who usually is saving everyone needed saved. Tony’s peers gave him a full work up, and they soon found out he was having a heart attack. He was rushed to MCR where he had stents placed and later double bypass. He has worked hard to follow all the doctor’s orders, and he strives to make a full recovery.

Tony is now back to work and getting back to his many jobs in the community. He’s also trying to use his scary experience to help educate people on heart health and symptom recognition. Because of his medical background and intuition, he is still alive today. Per usual Tony style, he would like to use this example for the benefit of many.

Now it’s our job to show him how much we appreciate him and all he does for our community. On Sunday, Aug. 29th, we are going to put on a spaghetti feed and silent auction in celebration of Tony and his recovery. Spaghetti, garlic bread, salad, and dessert will be served from 5 to 7 PM at the Lodgepole Valley Youth Camp. The silent auction will start at 5 p.m. and bidding will close at 7:30.

We are so happy that the hero of this story has a happy ending. Tony is such a great guy, and he just wants to continue living a happy life. He says nothing is going to hold him down, and that he has been blessed in life so he will just continue to help others as long as he can. We can all gain so much from his life experience and positive attitude. Cheers to Tony!