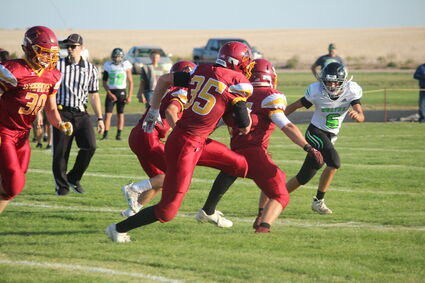 Featuring a well-balanced attack, the Leyton Warriors had no trouble putting away the visiting Maywood/Hays Center Wolves early in the game on their way to a 42-to-0 rout to start their season. Head Coach Glen Lipska looks to duplicate the success of last season, when the Leyton squad started their season with five straight wins. Returning senior Kole Bush seems completely healed from last year's leg injury, and tore through the Wolves' defense, carrying the ball 10 times for 15 yards and two touchdowns.

But the Warriors also had success throwing the ball, with senior Scout Gamble connecting on 5-of-14 passes for 88 yards and two touchdowns. The Warriors racked up 368 total yards against the Wolves 123 yards in the one-sided contest. The Warriors defense had an outstanding game, with 10 tackles for losses, two sacks and two interceptions by junior Justin Ernest.

Leyton next hosts Kimball on Friday, hoping the Longhorns have enough players to compete against the Warriors.