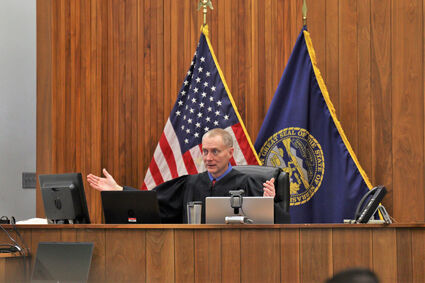 Nebraska District Court Judge Derek Weimer of Sidney, was invited to sit with the Nebraska Supreme Court on Aug. 31, 2021, for the first argument session of the term.

The court session was held in the Supreme Court Courtroom in the Nebraska State Capitol in Lincoln. The courtroom was closed throughout the most recent term of Court due to heating and air conditioning renovations in the Capitol. The August 31 arguments mark the Court’s return to the courtroom.

Seven justices make up the Nebraska Supreme Court: Chief Justice Mike Heavican and six associate justices. On occasion, a justice must recuse him or herself from a case, and a judge from a district court or the Court of Appeals is asked to sit with the Supreme Court.

The August 31 oral arguments can be viewed on the Court’s archive: https://supremecourt.nebraska.gov/courts/supreme-court/oral-argument-archive