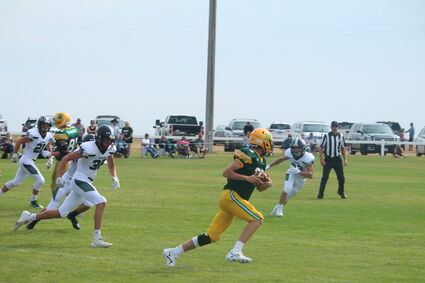 The Peetz Bulldogs opened their season with an easy 62-to-6 victory over Miami-Yoder, but had no easy task on Friday facing the visiting Fleming Wildcats.

The visitors started off fast, quickly scoring a touchdown, then shutting down the Peetz offensive attack. A bad punt snap gave the Wildcats great field position on their second series, and they quickly scored again to put Peetz in a hole. The next series featured more of the same, with the Bulldogs unable to run effectively and limited to short passes for very little gain. Another punt attempt went bad for Peetz, giving the Wildcats great field position again, followed by another quick score.

The Bulldog offense was unable to stop the Fleming running attack that was evenly dispersed among the Wildcats runners, with three Fleming players each scoring two touchdowns. By the end of the first quarter it was 22-to-0, and the rout was on. Fleming scored another 24 points in the second period, followed by 18 points in the third quarter and six more in the fourth quarter to breeze to a 70-to-0 victory.

The loss brings the Bulldogs record to 1-and-1, and the Peetz team looks to regroup against Pawnee at Peetz on Friday.