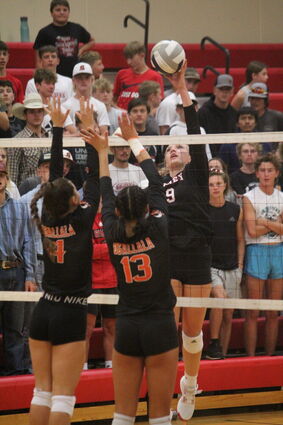 Sidney's Lady Raider Volleyball team stated their season with a big win on the road against the Sterling Lady Tigers, but had a setback on Thursday as they hosted Ogallala and North Platte, and dropped both matches. The losses move the Lady Raiders to 1-and-2 on the new season, but Head Coach Julie Smith looks to regroup her squad for a home match scheduled for Tuesday against Mitchell before traveling to compete at the Cozad Tournament on Saturday, September 11.

Sidney first matched up against North Platte on Thursday, and after taking the first set 25-to-16, the Lady Bulldogs recovered to win the second set 25-to-17. The third set was hard-fought by both teams, but North Platte was able to surge at the end and pull out a 25-to-23 third set win for a 2-to-1 match victory. North Platte then faced off against Ogallala, and the Lady Indians strong hitters swept two sets 25-to-16 and 25-to-20 for a 2-to-0 straight set victory.

The Lady Raiders then matched up against Ogallala for the last match of the evening. In the first set, Ogallala pulled out to an earlt lead, taking advantage of some mishits and setting errors by the Lady Raiders, but Sidney was able to battle back and close within three points. But Ogallala surged again, and benefited from some good fortune with balls finding empty spaces and rolling off the net for timely points and strong defense to pull away for the 25-to-16 first set victory. Sidney regrouped and started the second set in strong fashion, building an 8-to-4 lead before the Ogallala squad found their rhythm and battled back, tying the set at 8-to-8.

Ogallala pulled away to a 24-to-17 lead until the Lady Raiders made a comeback, scoring three straight points to move the score to 24-to-20 before losing the next point on a service error, and dropping the second set 25-to-20, giving Ogallala the 2-to-0 match victory.

Look for the Lady Raiders to improve as the season progresses as they have a talented team, but their younger players need to gain more experience and confidence to play together as a unit.