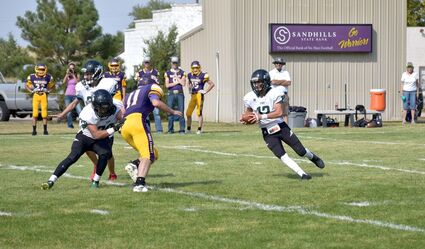 Creek Valley’s Storm Football team traveled to Harrison for a Friday afternoon match-up against the Sioux County Warriors, with both teams looking for their first win of the season. The Warriors were able to hang on against the visitors, and earned the two point win after the teams battled and traded leads throughout the game.

Sioux County started with a turnover on their first play from scrimmage, but were able to clamp down on defense and get the ball back with good filed position. After a Sioux County touchdown was called back on an illegal block in the back penalty, the Storm was able to turn their good fortune into a touchdown near the end of the first period to take a 6-to-0 lead. Sioux County quickly struck back on the next possession with a touchdown pas to tie the game at 6-to-6.

Midway through the fourth quarter, Sioux County was able to mount a scoring drive to take a 38-to-36 lead, and both teams then struggled with penalties and miscues as time wound down. Creek Valley had one final chance for a touchdown on a passing play, but the Sioux County defense recovered and broke up the pass, then took over on downs and ran the clock out.

It was the Storm’s third consecutive loss, but the team showed considerable improvement in all aspects. They were able to run the ball and score, and their defense came up with key stops throughout the game.

Creek Valley looks to get on the winning track as they host Minatare in Chappell on Friday.