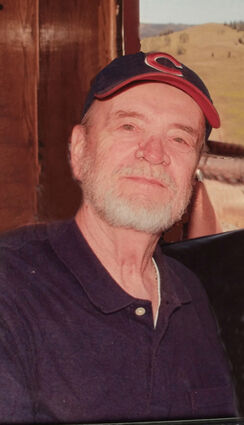 Denny Dick Smith, 82, passed away peacefully on September 17, 2021, at 3:05 p.m. with his wife Fran Smith at his side. He had been ill since late December of 2020 and had been in four hospitals and in Western Prairie Health & Rehab Facility in Ulysses since April 9.

Denny was born on September 8, 1939, to Darrell and Lela (Davis) Smith at Rexford, Kansas. His was the last home birth in that small town.

Denny excelled in music, especially singing. He sang in the church in Rexford on many occasions, and he majored in Voice with a minor in Instrumental at Bethany Lutheran College in Lindsborg, KS. He continued singing in the U.S. Navy at Beeville (TX) Naval Base choir and in every church the couple attended.

During college in Lindsborg, he married Kay VanDorn in 1958, and their son Brent was born in 1959. They divorced.

Denny joined the U.S. Navy in 1962 and was stationed in Beeville for the remainder of his service. He was a Control Tower Operator, helping to train pilots for the Vietnam War.

In Beeville, he met Frances Smith from Pflugerville, TX, and they married in 1966. After his honorable discharge from the Navy, Denny and Fran moved to Lindsborg, KS, where he continued his education, receiving his Bachelor of Music in 1967. The couple then moved to Utica, KS, where their son Christopher was born.

Their second son, Alden, was born in 1970. The Smiths then lived in Rexford, Quinter and Goodland, KS, Austin, TX, and Sidney NE, before Denny and Fran moved to Ulysses, KS, where they have resided for 21 years. Both taught in Ulysses before retiring in 2003.

Denny taught music in Utica, Quinter, and Montezuma before continuing his education at FHSU in Guidance Counseling and Administration, receiving a Master’s degree in both over the next several summers. He later went back to FHSU for certification to teach Special Education with behavior disordered students. He was a guidance counselor in Lenora and Goodland, KS, and a Special Education teacher in Sidney, NE. He ended his career in education in Ulysses as the guidance counselor for Kepley Middle School.

Denny was interested in so many things: music, photography, traveling, astronomy, and he also was the author of two volumes of personal short stories about growing up in Rexford. He also wrote a book containing biographical information about all the members of his Davis family, which he distributed to his cousins and their children. He was contemplating writing more stories before he passed away.

He was a member of Lions Club International, belonging to clubs in Utica, Lenora, Goodland, Sidney, and Ulysses. He was the District Governor of 17-K’s Lions District 4 in 2006, and he served his clubs as president and vice president. He was a very devoted and enthusiastic Lion who worked on some excellent projects to serve the people wherever he lived. His latest club was Ulysses Lions Club.

He is survived by his loving wife Frances L. (Smith) Smith of Ulysses; three sons: Brent and partner Lynn, Christopher and partner Jason Blackwell, and Alden and wife Phyllis; grandson Kinton Smith and wife Sarah and great-grandson Ronan; many cousins and a host of friends and former students.

Memorial contributions may be given to Denny Smith Music Scholarship Fund or the Ulysses Lions Club in care of Garnand Funeral Home, 405 W. Grant Ave., Ulysses, Kansas 67880. Condolences may be posted at http://www.garnandfuneralhomes.com.