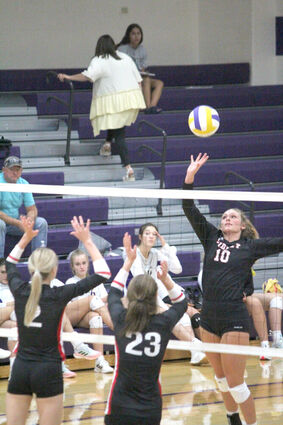 Sidney’s Lady Raider Volleyball team seems to be pulling out of their slow start, winning two matches and dropping one over the week to move their season record to 5-and-5. On Tuesday of last week, Sidney traveled to Bridgeport for a Triangular with the Lady Bulldogs and the Chadron Lady Cardinals. Sidney started off against Chadron, and after dropping the first set 25-to-16, regrouped and fired back with a convincing 25-to-15 win in the second set. The third set was a hard fought battle, with Sidney taking an early lead only to have Chadron dig in and fight back to tie the set. They needed extra points to resolve the match, and the Lady Raiders hanging in a grabbing the last two points for a 27-to-25 third set win and a 2-to-1 match victory. Senior Alecca Campbell led the offense with 15 kills, while senior Emillee Wieser overcame early serving difficulties to knock down four Ace Serves in the match. Senior Brynna Ross led with 10 assists in the match.

Next the Lady Raiders faced host Bridgeport, who came into the match with a 9-and-1 record. But Sidney started strong and was able to build a lead and take the first set 25-to-18. Bridgeport regrouped and battled the Lady Raiders in the second set, and extra points were needed to resolve the set, with the Lady Bulldogs pulling out a 26-to-24 win. The third set had both teams battled hard for the win, but Bridgeport was able to pull ahead and secured the 25-to-21 third set win for a 2-to-1 match win. Freshman Kayla Westby led with eight kills in the match, while Ross again led in assists with 17.

Sidney was at home on Thursday where they hosted the Alliance Lady Bulldogs, and battled hard for a first set 25-to-20 win. They continued their momentum into the second set, and handily put down the Alliance team 25-to-16. A convincing 25-to-15 third set win gave Sidney the 3-to-0 match win, and evened the Sidney record at 5-and-5 for the year. Sophomore Karsyn Leeleing led the offense with 10 kills while juniors Reese Riddle and Rheagan Stanley each had three Ace Serves in the match. Riddle also had 14 assists in the match to lead the team.

Sidney was scheduled to host Chase County on Tuesday.