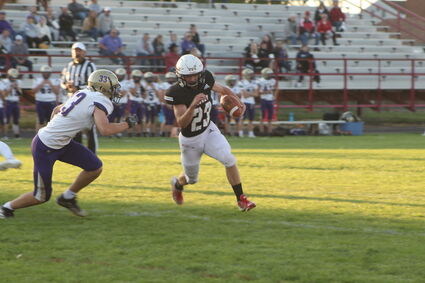 Sidney’s Red Raider Football team had their Homecoming celebration spoiled by a Holdrege Dusters team that took advantage of a depleted Sidney squad, and dropped their second game in a row by a final score of 21-to-12.

With starting running backs and scoring threats Luke Holly and Cam Leeling both sitting out the game due to concussion protocol, and with the absence a few other key players due to illness, Sidney had a tough task ahead of them in defeating a Dusters team with a good defense and dangerous offense.

Sidney was able to strike first in the contest, taking advantage of a Holdrege fumble early on at midfield.

Sidney drove downfield, and a six play drive resulted in two yard touchdown plunge by quarterback Isak Doty, and after a failed point-after attempt, the Red Raiders led 6-to-0.

After the Sidney defense forced a punt on the Dusters next possession, running back Nathan Kennedy blasted a big run up the left side of the field, going 55 yards and moving the ball to the Duster 25 yard line. But the drive stalled deep in Holdrege territory, and the Red Raiders turned the ball over on downs.

The Dusters offense finally started to click, and were able to drive 89 yards and burn up over half of the time in the second quarter, and cash in on an eight yard touchdown gallop by quarterback Jackson Hinrichs.

Sidney forced two fourth downs during the drive, but the Dusters were able to convert to keep the drive alive and score. After the point after kick was successful, Holdrege had a7-to-6 lead. The next Sidney possession marked the turning point of the game, when a Doty pass to Micah Schneider was intercepted by Hinrichs. The Dusters started at midfield and wasted no time, scoring on a 44 yard screen pass to fullback Cade Kirwan, and Holdrege took a 14-to-6 lead into the intermission.

Holdrege started with the ball in the second half, and went on a long drive but Sidney forced a fumble on fourth down and took over in their own territory. Sidney was unable to move the ball, and an unsportsmanlike conduct penalty forced the Red Raiders to punt from their own end zone.

A short punt was followed by a good defensive stand by Sidney, forcing an unsuccessful field goal try by Holdrege. Sidney was then able to go a long drive, highlighted by a Kennedy run for 42 yards through the heart of the Duster’s defense. On the first play of the fourth quarter, Doty was again able to blast through the line for a short touchdown plunge, and after a failed extra point try, Sidney narrowed the lead to 14-to-12.

But the Sidney defense was tiring, and after a great kickoff return set the Dusters up near midfield, Holdrege used six plays to drive down to the Sidney nine yard line. Sidney’s defense held for three plays, but on fourth down Hinrichs was able to connect with Trace Anderson for a touchdown, and after a successful point after attempt, the Dusters held a 21-to-12 lead. Sidney got the ball back for one last drive, but the seven play effort only gained 12 yards, and Holdrege took possession after Sidney punted the ball. With about five minutes remaining, the Dusters held on and burned the remaining time, ending the game in a 21-to-12 loss for Sidney.

Sidney moves to 2-and-2 with the loss, while Holdrege improved to 2-and-2. Sidney senior Nathan Kennedy did a fine job running, gaining 156 yards on 17 carries. But without Leeling and Holly to spread the defense out, Holdrege was able to contain Sidney’s offense, despite a few big runs by Kennedy. Isak Doty had one completion for 21 yards in eight passing attempts. Sidney only had one turnover in the game, and did a good job cutting down on penalties, with four flags for 40 yards on the night.

Both Kennedy and senior Austin Munier were injured and sat out the majority of the fourth quarter. Leeling and Holly are expected to return for Friday’s contest against the visiting Yuma Indians, however, there’s no word yet about Kennedy’s and Munier’s availability for the game.