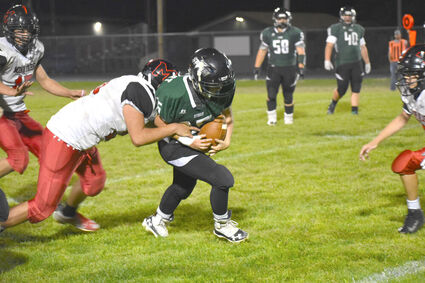 Creek Valley’s Storm Football team has struggled in the early going, with a low number of players contributing to their 0-and-3 start. But a switch to a Thursday night game, and a depleted opponent in the Minatare Indians, was just the right formula needed to get the Storm into the win column.

Minatare got the ball to start the second half but were stopped by the swarming Storm defense. Creek Valley quickly scored again to make it 52-to-20. Minatare tried to fire back, but Creek Valley intercepted a pass and brought it all the way back for a touchdown to close out their scoring. As the time wound into the fourth quarter, Minatare had a few impressive drives that ended up in scores, but it was far too little, and far too late, to effect the outcome, and Creek Valley took the victory, 58-to-34.

The Storm next hosts Banner County on Friday in Chappell, and look for their second win against a struggling 0-and-3 Wildcat team.