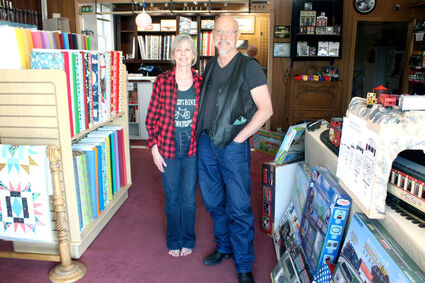 Inside nearly every child is the excitement of travel. For some it is fast cars, for others it is flight and still others it is being in command of the rails.

Some children never fully grow up. They just reduce their focus their attention on models and scale size trains.

That is where Andrew Holbrook comes in. Andrew and his wife Lynn moved to Sidney a little more than a year ago at the urging of friends, relocating from Colorado. They then opened a store in downtown Sidney offering all varieties of model trains, from train whistles, hats and watches, to several scales of model trains.

The store has at least two focus points: “Andrew's Trains and Blue Fiddle Fabrics.” The store is located at 1025 10th Ave., Sidney.

“You can run your trains while sitting by the fire,” Holbrook said.

Holbrook also offers train kits from the Z-size, compared to a few coins, to model kits and trains large enough for the “man cave.”

He has vintage trains including Lionel. His oldest locomotive is from 1946.

What he can't find in terms of parts, he sometimes makes with his 3-D printer. The 3-D printer has produced train whistles and complete trains.

The focus of the store is fairly broad, anything about trains. He also repairs model trains.

“I like working on stuff, building things,” he said.

His wife Lynn adds “he is good at it.”

On the other side of the store, his wife Lynn displays her skills in quilts.

“Mostly, this store is for quilters,” she said.

She is very particular about the style and designers of quilts. Her focus appeals more to the modern quilters than traditional designs. She has been attracted to colors and designs since she was young. She graduated from college with majors in fibers and print making.

“I absolutely love color,” she said.

She said her focus is to excite people with the fun of quilting.

“I just want to turn people on to quilting,” she said.

She said she knows of some men who have taken up quilting.

“I enjoy quilting a lot,” she said.

Andrew's Trains and Blue Fiddle Fabrics will be hosting a grand opening 10 a.m. To 5 p.m. Oct. 8. Free cookies and craft roasted “Sidney Blend” coffee by Bean Cycle will be offered throughout the day.