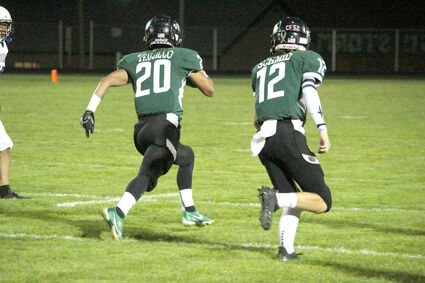 Creek Valley’s Storm Football team has now won two games in a row, after dropping their first three contests of the season, with a resounding 68-to-13 pummeling of the Banner County Wildcats Friday night of Homecoming Week for Creek Valley.

Banner County started the game on offense, and after the kickoff sailed through the end zone for a touchback, started at their own 15 yard line. After losing a few yards on three plays, the Wildcats punted, but it was blocked and the Storm started on Banner’s 16 yard line. On the first play, Creek Valley senior Lucas Trujillo took a handoff, then cutback and blasted through the Wildcats’ defense for a 16 yard score. The point after kick by senior Eli Schmid was good and Creek Valley had a quick 8-to-0 lead.

Banner again started on the 15 yard line after a touchback, and on their second play fumbled the ball, and Eli Schmid recovered for Creek Valley on the eight yard line. On the Storm’s first play, Trujillo again made a cutback thorough the defense for another rushing touchdown. After a missed point after, Creek Valley led 14-to-0. The ensuing kickoff was touched at the one yard line, forcing Banner County to try to return the ball. The Creek Valley kickoff team stopped the return at the five yard line. After stopping the Wildcats on three plays, Banner county was forced to punt, and the snap was mishandled by the punter in the back of the end zone and landed on the out of bounds line for a Creek Valley safety to move the score to 16-to-0.

Still in the first quarter after receiving the kick after the safety, Eli Schmid blasted a big run to get the Storm inside the Wildcat’s 10 yard line, and on third and one Schmid found 6’ 4” senior tight end Drew Fraass in the end zone for a touchdown. With a good extra point, the Storm went up 22-to-0.

Banner was finally able to get down into Creek Valley territory, but the Storm defense stiffened, and on fourth down and 11 forced an incomplete pass and a turnover on downs. On the Storm’s first play from scrimmage, Trujillo blasted out another long run for a touchdown to move the score to 32-to-0, and the rout was on. Creek Valley scored 20 more points in the second quarter while keeping Banner County off the board. Creek Valley went into the half up 52-to-0.

Banner County was able to score a touchdown in the third and fourth quarters, but Creek Valley responded with touchdowns of their own, and the game ended in a 68-to-13 win for the Storm. The win puts the Storm at 2-and-3 on the year, and next up the Storm travels to Arthur for an early afternoon contest on Friday against the powerful offense of the Arthur County Wolves.