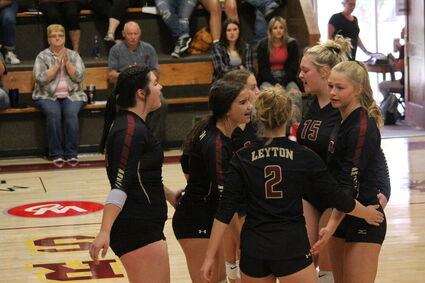 Leyton’s Lady Warrior Volleyball team started the season strong, picking up wins against the weaker opponents on their schedule. Then they hit a stretch where they struggled to even win a set against the likes of Garden County and Bridgeport. But the Lady Warriors are back on track, and two wins on Thursday at home put them back over the .500 mark for the season, and with some momentum as they come upon a stretch of matches against quality opponents.

On Thursday, the Lady Warriors first faced off with the Kimball Lady Longhorns. In the first set, Leyton started with six straight Ace Serves and built up a big lead until Kimball finally started to score some points. But the Lady Longhorns were overmatched and fell 25-to-15 in both sets. Strong net play by Leyton senior Cortney Holt and strong setting kept the Lady Longhorns on their heels for the entire match.

The Lady Warriors ended the triangular with a match agaisnt the Hay Springs Lady Hawks, and again pulled away with an early lead and held off the Lady Hawks for a 25-to-19 first set victory. In the second set, Hay Springs stayed close to Leyton for most of the set until the Lady Warriors pulled away at the end and took the second set victory, 25-to-16 and the 2-to-0 match win.

Leyton was scheduled to host the 15-and- Bridgeport Lady Bulldogs on Tuesday.