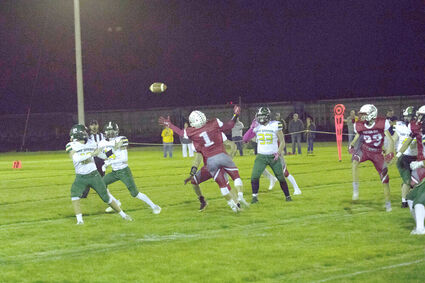 Potter-Dix’s Coyote Football team continued their success with a decisive 51-to-12 win over Hay Springs Friday night at Combs Field in Potter. After deferring to the second half, the Coyotes kicked off and put the Hawks deep in their own territory to start the game. After a few unsuccessful running attempts, the Hawks connected on a long pass to get the ball into Coyote territory. But the Potter-Dix defense stiffened and forced a turnover on downs. On the Coyote’s first play from scrimmage, sophomore quarterback Brayden Kasten found junior Luke Kasten on a short pass play, but Kasten wa...