Creek Valley Goes 2-2 On The Week 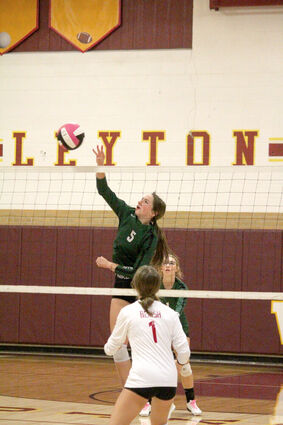 Creek Valley’s Lady Storm Volleyball team moved their record to 7-and-12 with two wins and two losses over the past week.

On Tuesday, October 5, the team traveled to Dalton for a triangular meet with Banner county and Leyton, and came away with two victories after upsetting the home Leyton Lady Warriors.

Both Leyton and Creek Valley had no trouble putting down Banner County in straight sets, which set up the final match of the night against the two teams.

Leyton came into the match at 12-and-9, after going 3-and-2 in their five previous matches.

Creek Valley started the first set strong, opening a good lead until the Leyton squad came back to narrow the lead. But Creek Valley kept up the pressure and pulled away for a 25-to-15 first set victory.

The tables were turned in the second set as the Lady Warriors opened a lead and cruised to a 25-to-13 second set win. In the third and final set, both teams battled, with neither gaining much of a lead through the set. As the set wore down, the action tightened, and extra points were needed to decide the match.

It was the Creek Valley squad that pulled out the last two points, earning a 27-to-25 set win and a 2-to-1 match victory.

The victory avenged a straight set loss back on September 11 against Leyton.

On Thursday October 7, the Lady Storm returned home to host the Bayard Lady Tigers, one of the stronger teams in the area. The Lady Tigers opened fast and pulled away quickly in the first set for a 25-to-13 victory.

The visitors continued their fine play in the second set as the Lady Storm tried to make adjustments, but it was not enough for the home team as they dropped the second set 25-to-18.

On Friday, the Lady Storm ended their week with a trip to face the Arthur County Lady Wolves, and fought hard in the first set until the Lady Wolves were able to get the last two points and earn a 25-to-23 first set victory.

They continued that momentum and pulled away early in the second set, winning by a score of 25-to-14.

Creek Valley got into a better rhythm in the third set, and opened a lead and pulled away for a 25-to-22 victory.

The fourth set was a good battle between the teams, bu the Lady Wolves were just too strong on offense and took the final set 25-to-21 for the 3-to-1 match victory.

The Lady Storm were scheduled to play against the Peetz, Colo., Lady Bulldogs, but Peetz had to cancel their remaining games due to lack of players.

The Lady Storm’s next scheduled game is on the road against Bayard on Monday, October 18.