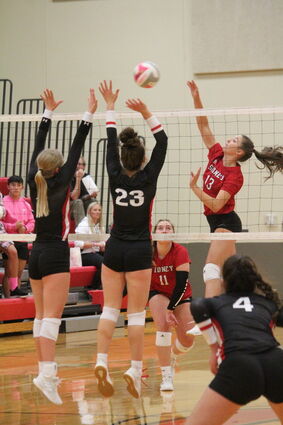 The Sidney Lady Raider Volleyball team had beaten the Chadron Lady Cardinals twice already this season, but had the tables turned on them on Tuesday, October 12th, when the Chadron squad visited for a match up.

Chadron came in riding a wave of momentum after beating a very tough Mitchell team on Saturday, and came out firing against the Lady Raiders, quickly building a lead early in the first set. The Sidney squad settled down, and got into a rhythm and started to narrow the Chadron lead. But the Lady Cardinals kept finding holes in the defense and did not let up and took the first set 25-to-20.

Sidney looked to rebound in the second set, but again fell behind and had to work their way back into the set against the aggressive hitting of the Lady Cardinals. Sidney was able to string groups of points together, but were unable to sustain rallies long enough to catch the Chadron squad, and lost the second set 25-to-19.

In the third set, Chadron continued their strong play, and pushed the Sidney squad into positioning errors and missed shots. Sidney battled hard and narrowed the lead, but could not steal the momentum from the visitors, and fell 25-to-21 in the third set for the 3-to-0 straight set loss. Senior Alecca Campbell led the offense with 10 kills, Karsyn Leeling had 3 blocks, and Brynna Ross had 18 assists in the loss.

The Lady Raiders had a few days off to rest and regroup, and were scheduled to travel to Gering on Tuesday to match up against the Lady Bulldogs.