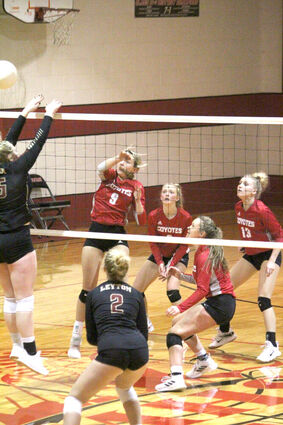 On Saturday the Lady Coyotes traveled to Minatare for the MAC Tournament Saturday morning, and were knocked out in the first round after Leyton staged a comeback to steal a win from the Potter-Dix squad.

The Lady Coyotes started out strong and found a good rhythm early, scoring and placing the ball in all corners and building a lead. Leyton fought back to narrow the contest, but the Lady coyotes were able to pull away and earned the first set victory, 25-to-21.

Potter-Dix again started the second set strong, and opened a good lead before the Lady Warriors fought back to narrow the lead. As the set wore down, Leyton built a lead and pulled away for a 25-to-15 second set win.

The third and final set again started with Potter-Dix opening strong, and the Leyton squad looking out of sorts in the beginning of the set. But the Lady Warriors settled down and started to place their shots well, and get good sets. After narrowing the Potter-Dix lead to 14-to-13, the Lady coyotes responded with a surge to open a 18-to-14 lead. They kept up the momentum and built a 24-to-21 lead.

But Potter-Dix could not get the final point. Leyton scratched and scrambled and stole the momentum, while the Lady Coyotes made errors and mis-hits. Leyton charged back to take a 25-to-24 lead and put away the game when Leyton sophomore Kaitlyn Craig got up high and walloped a kill down the right side of the court, giving Leyton the third set 26-to-24, and the match victory 2-to-1.

Potter-Dix was next scheduled to host Creek Valley in Potter on Tuesday.